A Pathway Under the Gaze of Mary 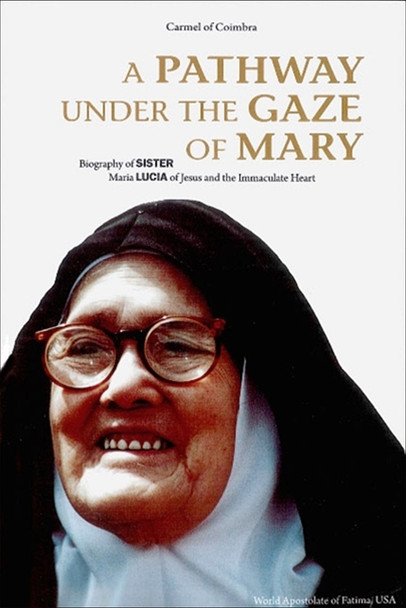 A Pathway Under the Gaze of Mary

Biography of Sister Maria Lucia of Jesus and the Immaculate Heart.

Sister Lucia was a prominent figure of the Portuguese Catholic world of the 20th Century. As the Shepherdess of Fatima who, together with Francisco and Jacinta saw our Lady in 1917, she is regarded as a child blessed and chosen to spread the message of peace and salvation of God throughout the world.

As a Carmelite nun, she was known as as a privileged person dedicated to God and in service to His Church, one in whom people placed enormous confidence because of her role as Our Lady's confident. The contemporary history of the Church would hardly be complete without the inclusion of Sister Lucia's role.

The references to the Holy Father and to his sufferings since the apparitions, as well as the revelation of the third part of the Secret of Fatima and the dramatic events experienced by the Church in the late second and early third millennium do not allow us to ignore Sister Lucia. Reading the biography, A Pathway Under the Gaze of Mary, gives us a broader perspective of Sister Lucia's personality.

Now: $3.95
Was:
Handmaid of the Lord How can a human woman be God’s mother? Where in the Bible does it say that Mary was sinless and a perpetual virgin? Doesn’t praying to Mary and calling her...

Mary: The Mother of God

Now: $19.95
Was:
She was a humble girl from an ordinary Jewish family. Yet Mary came to be exalted as the Daughter of Zion, the Mother of God, and the Queen of Heaven. All because this simple girl said a simple word:...

Refuting The Attack on Mary

Now: $12.95
Was:
Are you able to defend our Blessed Mother? In Refuting the Attack on Mary, Fr. Mateo uses sacred Scripture and the writings of the Church Fathers to show the justification for Catholic beliefs...

Now: $19.95
Was:
Mary is often a big stumbling block for Protestants and Catholics alike. For Protestants, the Bible doesn't seem to say much about Mary -- certainly not in comparison to what the Catholic Church...

Now: $3.99
Was:
Handmaid of the Lord How can a human woman be God’s mother? Where in the Bible does it say that Mary was sinless and a perpetual virgin? Doesn’t praying to Mary and calling her...

Ask Peter Kreeft: The 100 Most Interesting Questions He's Ever Been Asked

Now: $18.95
Was:
I’ve given thousands of lectures around the country to engaged, thoughtful, curious university and church audiences and have always made it a practice to allow for as many questions as possible...

The Illustrated Book Of Mary

Now: $12.95
Was:
The Illustrated Book of Mary includes a prayer and the history of Marian Apparitions and devotions from Our Lady of Grace to Our Lady of Altagracia. There are 30 different Marian stories along with...

Now: $17.95
Was:
Suspense, politics, sin, death, sex, and redemption: Not the plot of the latest crime novel, but elements of the true history of the Catholic Church. Larger-than-life saints such as Athanasius of...

What Really Happens After We Die

Now: $14.95
Was:
In What Really Happens After We Die professor of Church history Dr. James Papandrea gathers in one place all that is known about the afterlife — drawn from the teachings of Jesus, the...

Now: $19.95
Was:
The apostles preached and preserved the Faith they received from Jesus. This is the story of what happened next. In The Very First Fathers, Jimmy Akin (author of the best-selling book The...