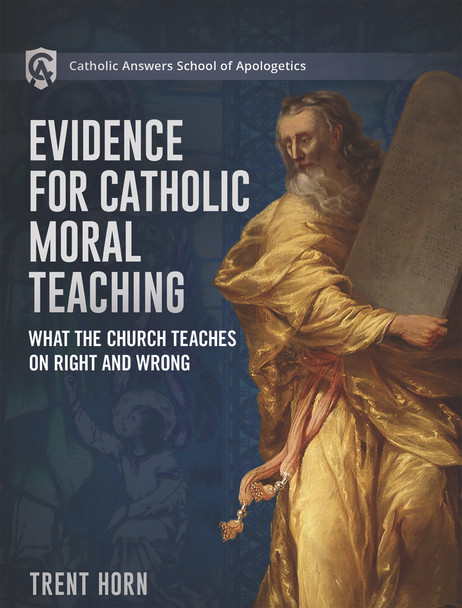 If you faithfully live out the Catholic Church’s moral teachings there’s a good chance people will say you’re “homophobic” “transphobic” or “anti-woman.” It’s not enough for Catholics to be able to share the Church’s teachings, they must be able to defend them as well.

That’s why the Catholic Answers School of Apologetics is offering Moral Apologetics as a resource to equip you to understand, explain, and defend the Church’s teachings on topics like:

You’ll also learn how to tackle tough issues like:

The course contains more than 60 short, easy-to-watch video segments, so you can study at your own pace.

Moral Apologetics will give you the knowledge and confidence you need to defend your faith. Even seasoned defenders of the Faith will learn things they didn’t know before.

***This page is for pre-ordering the the Home Version (DVD/Booklet) version of Moral Apologetics , which is expected Early June - Pre-Order now to take advantage of our "Stuck At Home" price ***

Now: $25.00
Was: $104.00
Five of Our Most Popular History Titles At a Special Price! The Apostasy That Wasn't: The Extraordinary Story of the Unbreakable Early Church Handed Down: The Catholic Faith of the Early...

Now: $25.00
Was: $79.75
Five of Our Most Popular Titles At a Special Price! Why We're Catholic Meeting the Protestant Challenge The Bible is a Catholic Book Made This Way The Protestant's Dilemma

Now: $15.95
Was:
“The God of the Bible is a bloodthirsty dictator.” “Extraordinary claims require extraordinary evidence.” “Religion is the cause of war, suffering, and intolerance...

Now: $15.95
Was:
The greatest teacher who ever lived, Jesus knew how to reach his audience where they were at. Whether preaching to a group in parable or holding an intimate conversation, he had an unequaled ability...

Now: $16.95
Was:
Common Sense About the Common Good Pope Leo XIII wrote of the “harvest of misery” that socialism brings. Pius XI said that it’s impossible to be a good Catholic and a good...

Now: $25.00
Was: $50.00
Five of Our Most Popular EBook Titles At a Special Price! Why We're Catholic Meeting the Protestant Challenge The Bible is a Catholic Book Made This Way The Protestant's Dilemma