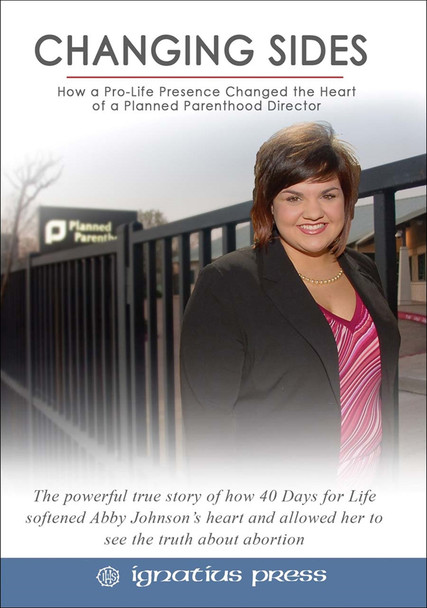 Can hearts really be changed on the issue of abortion?

Changing Sides tells the powerful true story of the conversion of a dedicated Planned Parenthood director to a leading Pro-life Activist. Abby Johnson was the director of the abortion facility that was the launching pad of the bold new pro-life effort - 40 Days for Life.

Abby believed that she was helping women by working for the nation's largest abortion operation, Planned Parenthood.  She quickly rose in the ranks to become the director of an abortion facility and was even given an "Employee of the Year" award.

But one Fall morning everything changed.

Abby suddenly she found herself on the other side of the fence, facing the truth about abortion.  The real question now was, in her time of crisis, what would she do and who would help her?

This film reveals what happens when people pray, fast, sacrifice, love their enemies and take a stand on the most controversial issue of our time - abortion.  Fences come down, hearts change, and the love of God shines light in the darkest, most unexpected places.  And the evil of abortion is exposed and defeated.

The film includes exclusive interviews with those Abby encountered while she was on both sides of the fence including - the activists who prayed for her daily, the secular media who broke the big story of her conversion, the attorney who won the massive lawsuit that Planned Parenthood tried to silence her with and more.

This is an All Regions DVD

Now: $3.95
Was: $4.95
20 Answers: Abortion will deepen your understanding of this critical moral issue, and give you the knowledge you need to explain it to others.  The Human-Rights Issue of Our Age <

Now: $3.95
Was: $4.95
A Matter of Life and Death Why is it wrong to help someone commit suicide? Don’t people have a right to die with dignity rather than being a burden to others?

$19.95
Now: $10.00
Was: $19.95
No matter how hard you try, talking with your friends and family about abortion too often winds up at one extreme or the other—either tempers and emotions get out of hand or to keep the peace you...

Now: $21.95
Was: $24.95
A film that speaks to one of the most polarizing topics of our day. Unplanned brings us an eye opening look inside the abortion industry from a woman who was once its most passionate advocate...

Now: $16.95
Was:
Why would intelligent, successful people give up careers, alienate friends, and cause havoc in their families…to become Catholic? As he was considering his own journey into the Church, Donald...

Now: $19.95
Was:
How did we get here?How did everything get here – our planet, our solar system … our universe?Physics provides the fundamental suggestion of a beginning and fine-tuning of the universe...

$19.95
Now: $10.00
Was: $19.95
We will lose the fight for America if we don’t stop and answer one simple question—What went wrong?American society has changed dramatically—and for the worse. We’re already...

Now: $30.00
Was: $79.75
Five of Our Most Popular Titles At a Special Price! Why We're Catholic Meeting the Protestant Challenge The Bible is a Catholic Book Made This Way Navigating the Tiber

Now: $19.95
Was:
In all of God's creation we see such splendor and beauty, mystery and wonder. Within this creation there are beings with intellect and free will: humans and angels. From the creation of the world,...