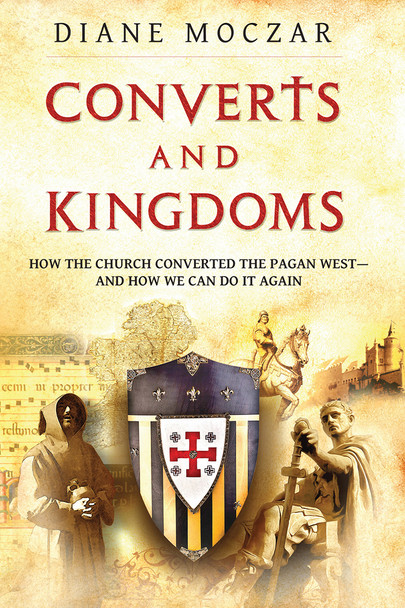 Mere centuries after its beginning as an obscure Jewish sect, the Catholic Church stormed the ancient Western world, and from its Roman remnants and barbarian tribes a united Christendom was forged.

How do we explain this remarkable success?

And what can we learn from it?

In Converts and Kingdoms, Professor Moczar tells the story of early Christianity’s faith, courage, and cunning—chronicling the labors of missionaries and martyrs (with no small help from Providence) to spread the gospel and lay the foundation for the most magnificent culture human history has ever known.

With her stirring narrative style, Dr. Moczar reveals a young Church ardently occupied with the great work of conversion: with saints and generals, priests and kings alike filled with zeal to make disciples of all nations. From the Roman temples at the heart of the old world to the Aztec altars on the border posts of the new, you will encounter heroic tales of the nascent Faith, including:

Within these pages you will find not only the story of the Church’s early missionary efforts but also an analysis of why they succeeded: providing you valuable lessons for re-evangelizing a modern West that has slipped into a new and insidious form of paganism.

Read Converts and Kingdoms today to be inspired by the convert-makers of the past, and to learn from them how to win the world anew for Christ.

Now: $12.95
Was:
Getting to know the Church Fathers means getting to know our own roots. It means knowing more deeply who we are as we learn more and more about who they are. The early Christians are our ancestors,...

Now: $21.95
Was:
What was the early Church like? Contrary to popular belief, Rod Bennett shows there is a reliable way to know. Four ancient Christian writers—four witnesses to early Christianity —left us an...

Now: $24.95
Was:
The essence of Christianity is this: we hold fast to what we were given by those who came before us. From Jesus and the apostles to believers throughout history, God’s saving revelation has...

$14.95
Now: $7.95
Was: $14.95
Your mission: Proclaim the Good News Your weapons: Faith and reason—and the power of the Holy Spirit Your opposition: The world, the flesh, and the devil When Dan McGuire was an officer in...

Now: $12.95
Was: $16.95
The renaissance of Catholic apologetics has done great good for the Church. Ordinary Catholics are learning how to defend and explain the Faith—and to share it enthusiastically with...

Now: $16.95
Was:
From the Mayans to Martin Luther to modern doomsday preachers, there’s a long list of people who predicted the end of the age—and got it wrong. As a response to widespread concern about...

Now: $18.95
Was:
One of the ways Jesus answered his critics was to use their own words against them—to show how even the enemies of the Faith admitted crucial facts that undermined their own position...