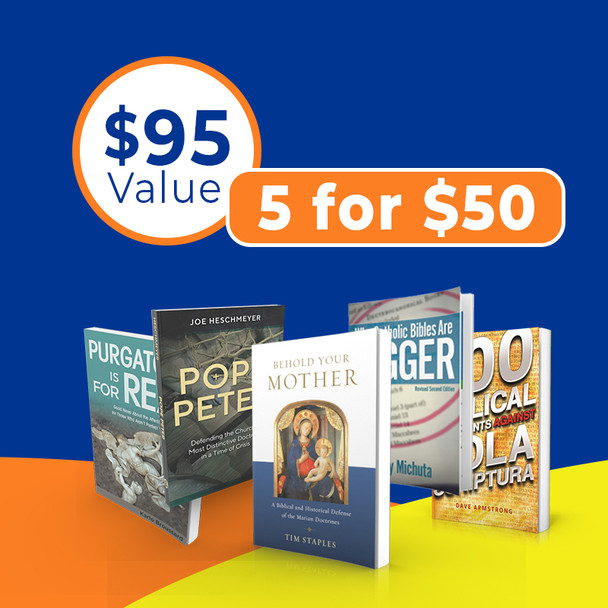 This collection will give you what you need to answer the tough questions - About Mary, Sola Scriptura, the Bible, the Papacy, and Purgatory.

Now: $15.95
Was:
A storm has been brewing in society and its treatment, views, and activities toward the Catholic Faith. Some are subtle, others are more brazen -- New Age thought, questionable spirituality,...

Now: $27.95
Was:
Unbelievers, doubters and skeptics continue to attack the truths of Christianity. Handbook of Catholic Apologetics is the only book that categorizes and summarizes all the major arguments in support...

A Teacher of Strange Things: Who Jesus Was, What He Taught, and Why People Still Follow Him

Now: $17.95
Was:
We’ve grown way too comfortable with the story of Jesus. Nice man, right? Taught us to love one another. Said not to judge people. Tragically killed by his enemies. We celebrate his birthday every...

A Catholic Scientist Champions the Shroud of Turin

Now: $17.95
Was:
The Shroud of Turin is celebrated as one of the holiest and most important relics of Christianity, with millions of pilgrims traveling to see the precious cloth in Italy on the rare occasions it...

Now: $50.00
Was: $93.00
Dialoguing with Protestants can be difficult, but with this handy Survival Kit on your bookshelf you'll be able to answer the tough questions. Meeting the Protestant Challenge: Karlo Broussard...

Now: $40.00
Was: $83.00
Dealing with non-Catholics can be difficult, even more so when there's little common ground to work with. These 5 great volumes will give you what you need to answer some of the more common...

Now: $50.00
Was: $101.75
Perfect for the Church history lover on your list! Five of our very best Church history titles at a savings of over 50%! The Early Church Was the Catholic Church by Joe Heschmeyer Light From...

Now: $30.00
Was: $48.85
Get Our 3 Newest Titles From Spring 2021: A Teacher of Strange Things by Cy Kellett: Cy takes you on a journey of discovery, helping you see with fresh eyes the once-familiar Jesus Christ. If you...

Now: $30.00
Was: $58.85
There's no better way to learn about the Holy Family than our new Holy Family Pack! A Teacher of Strange Things: Who Jesus Was, What He Taught, and Why People Still Follow Him: In A Teacher of...

Now: $30.00
Was: $71.85
Three of Jimmy Akin's Biggest Bestsellers - Over 50% Savings! The Fathers Know Best A Daily Defense Teaching With Authority