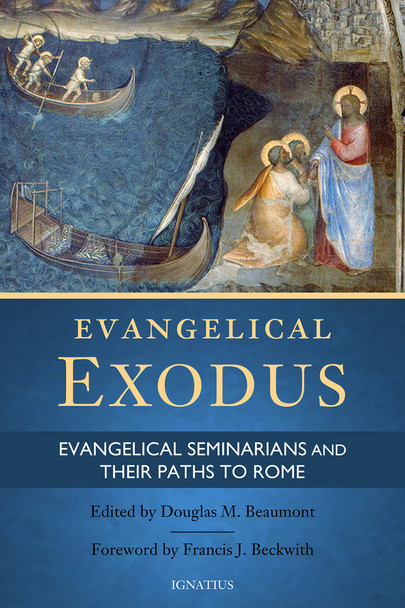 Over the course a single decade, dozens of students, alumni, and professors from a conservative, Evangelical seminary in North Carolina (Southern Evangelical Seminary) converted to Catholicism. These conversions were notable as they occurred among people with varied backgrounds and motivations—many of whom did not share their thoughts with one another until Evangelical Exodus was produced. Even more striking is that the seminary's founder, long-time president, and popular professor, Dr. Norman Geisler, had written two full-length books and several scholarly articles criticizing Catholicism from an Evangelical point of view.

What could have led these seminary students, and even some of their professors, to walk away from their Evangelical education and risk losing their jobs, ministries, and even family and friends, to embrace the teachings they once rejected as false or even heretical? Speculation over this phenomenon has been rampant and often dismissive and misguided—leading to more confusion than understanding. The stories of these converts are now being told by those who know them best—the converts themselves.

They discuss the primary issues they had to face: the nature of the biblical canon, the identification of Christian orthodoxy, and the problems with the Protestant doctrines of sola scriptura ("scripture alone") and sola fide ("faith alone").

"This is a true 'Book of Exodus'—riveting like the original, inspired, and inspiring. The contributors have taken a long journey to the banks of the Tiber, and it is every step an adventure." —Scott Hahn, President, St. Paul Center for Biblical Theology

"The integrity of this significant book is matched only by the passion of its contributors. Their honesty in recounting an odyssey of faith is refreshing indeed." —Wayne Alan Detzler, Professor Emeritus, Southern Evangelical Seminary

"Just when I thought I'd heard all the reasons why Protestants become Catholic, I encountered Evangelical Exodus. This book has set a new standard for compelling conversion stories." —Devin Rose, Author, The Protestant's Dilemma

"As these thoughtful contributors reveal, there is an exodus of smart Evangelical converts, marching backward in time, but forward in thought, to the promised land of Catholicism." —Brandon Vogt, Author, Saints and Social Justice

"These conversion stories will encourage more Protestant ministers to come into the Church, as well as fallen away Catholics to come back home. I recommend this great book for everyone!" —Terry Barber, Author, How to Share Your Faith with Anyone

Now: $13.95
Was:
Deathbed Conversions contains the stories of famous people like John Wayne, Gary Cooper, Dutch Shultz, Patricia Neal, Oscar Wilde, and more -- we come to learn that a deathbed conversion is not a...

Now: $14.95
Was:
A storm has been brewing in society and its treatment, views, and activities toward the Catholic Faith. Some are subtle, others are more brazen -- New Age thought, questionable spirituality,...

Evidence For Our Faith

$19.95
Now: $10.00
Was: $19.95
Little more than a generation ago, apologetics was not a niche pursuit for extra-zealous Catholics—it was an integral part of instruction in the Faith. Fr. Joseph Cavanaugh’s Evidence...

Now: $14.95
Was:
A storm has been brewing in society and its treatment, views, and activities toward the Catholic Faith. Some are subtle, others are more brazen -- New Age thought, questionable spirituality,...

$15.95
Now: $5.00
Was: $15.95
A preacher's kid at a Catholic university, Kevin Lowry settled into a “double major in beer and billiards” soon followed by uncomfortable run-ins with pious students, failing grades,...

Now: $1.00
Was: $19.95
“Whatever I have learned,” writes Karl Keating, “I have learned from masters of the craft.” In this delightful and engaging memoir, the father of the modern Catholic...

Now: $11.95
Was:
Getting to know the Church Fathers means getting to know our own roots. It means knowing more deeply who we are as we learn more and more about who they are. The early Christians are our ancestors,...

$22.95
Now: $14.95
Was: $24.95
The essence of Christianity is this: we hold fast to what we were given by those who came before us. From Jesus and the apostles to believers throughout history, God’s saving revelation...

The Apostasy That Wasn't: The Extraordinary Story of the Unbreakable Early Church

Now: $24.95
Was:
The theory goes like this: Just a few centuries after Christ’s death, around the time the Roman Empire converted to Christianity, the true Faith suffered a catastrophic falling-away. The simple...