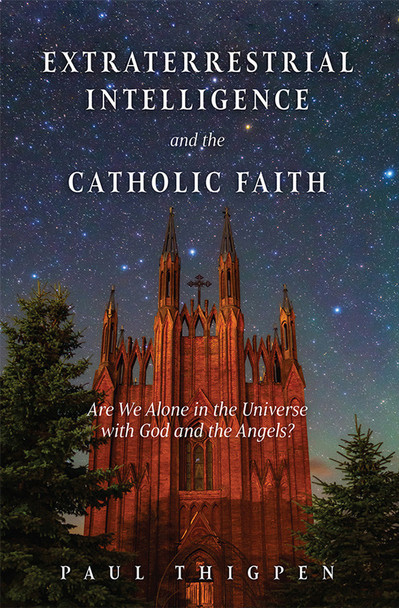 Does intelligent life exist beyond earth?

For more than half a century, the question of extraterrestrial intelligence (ETI) has been widely dismissed in our culture. That wasn’t always the case. Some of the best minds of the last twenty-five centuries in Western civilization have grappled with this mystery.

In Extraterrestrial Intelligence and the Catholic Faith, best-selling author Paul Thigpen begins with a fascinating historical survey of the public conversation about ETI, tracing the thought of prominent Catholics and others.

In light of this history, readers will discover answers to these questions:

Still more, a concluding appendix addresses the related issue of unidentified flying objects (UFOs) and the speculation surrounding them.

Recent developments in astrophysics, technology, and UFO-related disclosures by the Pentagon have reawakened the public discussion about ETI. Extraterrestrial Intelligence and the Catholic Faith is a thorough guide to navigating the conversation from a faithful Catholic perspective.

$15.95
Now: $14.35
Was: $15.95
How can Catholics explain what the Church teaches about the relationship between science and faith? Scientist, writer, and scholar Stacy Trasancos gives us ways we can talk about how science and our...

$22.95
Now: $19.95
Was: $24.95
The essence of Christianity is this: we hold fast to what we were given by those who came before us. From Jesus and the apostles to believers throughout history, God’s saving revelation has...

Now: $18.95
Was: $21.95
Heresies, schisms, culture of death, persecutions, excommunications … While reflective of headlines from today, these difficulties roiled Christians of the early Church as well. In fact, the...

Catechism of the Spiritual Life

Now: $21.95
Was: $24.95
In this dynamic and authoritative book on the spiritual life, Cardinal Robert Sarah shows us how to enter into and progress through the spiritual life. He notes that the goal of this book is...

Now: $18.95
Was:
Protect your phone with style using a durable, dual-layered case. The outer shell is made of impact-resistant polycarbonate, while the inner lining sports TPU lining for maximum impact absorption...

Now: $14.95
Was:
Get a two-in-one deal with these AirPods cases: an impact-absorbing protector for your earbuds and a stylish accessory you can attach to your clothes and bags with a metal carabiner. This case is...

Now: $25.00
Was: $69.75
Want a great collection of Catholic books to read through Advent and into the New Year? We've outdone ourselves with our Advent Edition! What's in the box? It's a mystery! Build up your...

Now: $4.45
Was: $4.95
The Good News Starts Here Can we really know who wrote the Gospels and when? What are some of the different ways that Matthew, Mark, Luke, and John tell the story of Jesus? Why are other ancient...

Now: $4.45
Was: $4.95
A Map to the Moral Universe What is morality and where does it come from? Is it okay to do something “wrong” if in my conscience I believe it’s right? How do we know what actions...

Now: $4.45
Was: $4.95
Born of Water and Spirit What does baptism do, anyway? Must we be baptized by immersion in water, or is sprinkling enough? Is it possible to be baptized if you don’t already believe in...

Now: $13.95
Was: $16.95
The runaway bestseller is now available in Spanish How can you believe all this stuff? This is the number-one question Catholics get asked—and, sometimes, we ask ourselves. Why do...

Tearing Us Apart: How Abortion Harms Everything and Solves Nothing

Now: $26.95
Was: $29.95
With the Supreme Court's overturning of Roe vs Wade, a powerful new book re-frames the current debate: Our fifty-year experiment with unlimited abortion has harmed everyone—even its most...