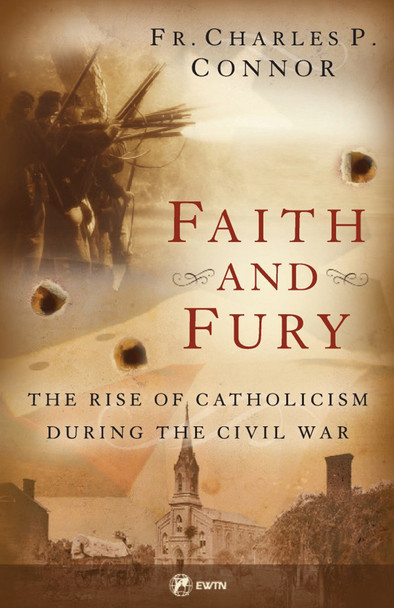 In the bloody Civil War that split our nation, American bishops worked for the success of the Union . . . and of the Confederacy! As Catholics slaughtered Catholics, pious priests on both sides prayed God to give success in battle. . . to their own side. Men in blue and men in gray flinched at the Consecration as cannonballs (fired by Catholic opponents) rained down on them during battlefield Masses.

Many are the moving – and often surprising – stories in these pages of brave Catholics on both sides of the conflict – stories told by Fr. Charles Connor, one of our country’s foremost experts on Catholic American history.

Through searing anecdotes and learned analysis, Fr. Connor here shows how the tumult, tragedy, and bravery of the War forged a new American identity, even as it created a new American Catholic identity, as Catholics—often new immigrants—found themselves on both sides of the conflict.

Fr. Connor’s account shows that in the nineteenth century and on both sides of the conflict, the Church in America was a combination of visionary leadership and moral blindness – much as is the Church in America today. From consideration of the strengths and weaknesses of both sides, Catholics today will discover ways to bridge the gulf that today divides so many in our Church – and in our nation.

Apostles and Their Times: Archeology, History, and Scripture Unveil What Life Was Really Like During the Apostolic Age

$14.95
Now: $12.95
Was: $14.95
Here's an unflinching look at the lives and sacrifices of those first Christians who were given the task of spreading the Gospel to the ends of the earth. Relying on ancient documents — as...

Now: $15.95
Was: $17.95
Suspense, politics, sin, death, sex, and redemption: Not the plot of the latest crime novel, but elements of the true history of the Catholic Church. Larger-than-life saints such as Athanasius of...

Now: $14.95
Was: $17.95
Everybody’s favorite Catholic outer-space delivery pilots return for their greatest adventure yet in Weapons of War!   Fresh from saving the solar system while being introduced to God...

Now: $13.95
Was: $16.95
Many Protestants call themselves “Bible Christians”—in contrast with Catholics, who ignore the Bible because they have the Church instead. Too many Catholics have taken this...

Now: $16.95
Was: $18.95
About a century after Jesus died, a battle began for the Old Testament. Large numbers of faithful Christians fought about its contents and even about its right to be called a Christian book! On...

$19.95
Now: $15.95
Was: $19.95
These subjects have fascinated people for centuries, and the Bible has a surprising amount to say about each of them. Jimmy Akin has spent years studying the mysterious, and in this set he shares...