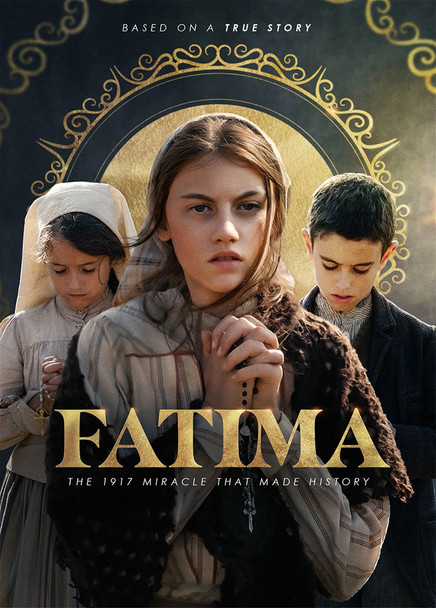 Fatima is a powerful and uplifting feature film that tells the dramatic true story of the apparitions of the Mother of God in 1917 to three shepherd children in Fatima, Portugal. The revelations from their visions inspire believers but anger officials of both the Church and the secular government, who try to force them to recant their story. The children must convince them of Our Lady’s appearances, and her urgent message to the world for prayer, penance and conversion.

As word of their visions spreads, tens of thousands of pilgrims flock to Fatima in hopes of witnessing a miracle. Over 70,000 witnesses experience the spectacular Miracle of the Sun that will change their lives forever.

Endorsed by the Vatican and Fatima Shrine, with original song by Andrea Bocelli.

Includes Bonus Features with 8 “Behind the Scenes” Featurettes, and a special piece highlighting Andrea Bocelli and his inspiring original movie song.

Now: $4.95
Was:
More to the World than Meets the Eye What are miracles, and why does God work them? How can I believe in miracles if I have never experienced one? Aren’t miracles just someth

Now: $4.95
Was:
More to the World than Meets the Eye What are miracles, and why does God work them? How can I believe in miracles if I have never experienced one? Aren’t miracles just some

Now: $4.95
Was:
Miracles are some of God's greatest gifts to the Church for evangelization, and yet Catholics seldom use them for that purpose. Tim will offer you a compendium of some of the most compelling...

The Miracles of Jesus: Fact or Fiction? (MP3)

Now: $4.95
Was:
Most Christians believe Jesus performed miracles, but some skeptics claim these events are just legends that were added to the Gospel accounts.

Light and Leaven: The Challenge of the Laity in the Twenty-First Century

$21.95
Now: $19.95
Was:
Bishop Joseph Strickland is one of the Church’s boldest and most courageous leaders. His outspoken support of orthodox faith and morals, the sanctity of unborn life, and reforming Catholic...

Now: $3.95
Was:
There are two universal themes in human experience: 1) We all seek true, lasting happiness, and 2) We have trouble finding it, because the world is a messed-up place. In times of turmoil, when...

Now: $30.00
Was: $79.75
Five of Our Most Popular Titles At a Special Price! Why We're Catholic Meeting the Protestant Challenge The Bible is a Catholic Book Made This Way Navigating the Tiber

Detoxing You and Your Family From Tech

Now: $10.00
Was: $19.95
Be honest: even with all the wonderful communications innovations in the last decade—smartphones and endless apps that make your life “better”—you’ve found yourself...