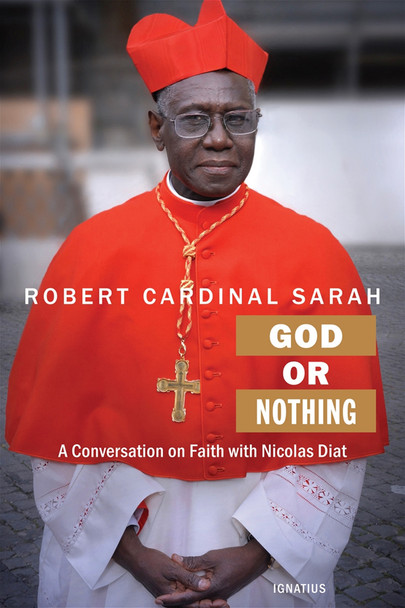 In God or Nothing, one of the most prominent and outspoken Catholic Cardinals gives witness to his Christian faith and comments on many current controversial issues. The mission of the Church, the joy of the gospel, the “heresy of activism”, and the definition of marriage are among the topics he discusses with wisdom and eloquence.

Robert Cardinal Sarah grew up in Guinea, West Africa. Inspired by the missionary priests who made great sacrifices to bring the Faith to their remote village, his parents became Catholics. Robert discerned a call to the priesthood and entered the seminary at a young age, but due to the oppression of the Church by the government of Guinea, he continued his education outside of his homeland. He studied in France and nearby Senegal. Later he obtained a licentiate in theology at the Pontifical Gregorian University in Rome, followed by a licentiate in Sacred Scripture at the Studium Biblicum Franciscanum of Jerusalem.

At the age of thirty-four he became the youngest Bishop in the Catholic Church when John Paul II appointed him the Archbishop of Conakry, Guinea, in 1979. His predecessor had been imprisoned by the Communist government for several years, and when Archbishop Sarah was targeted for assassination John Paul II called him to Rome to be Secretary of the Congregation for the Evangelization of Peoples. In 2010 Pope Benedict XVI named him Cardinal and appointed him Prefect of the Pontifical Council Cor Unum. Pope Francis made him Prefect of the Congregation for Divine Worship and the Discipline of the Sacraments in 2014.

Now: $15.95
Was:
In 2000, Pope John Paul II canonized the great 20th century visionary of Divine Mercy, Sister Faustina Kowalska, and proclaimed the Sunday after Easter to be celebrated annually as Divine Mercy...

7 Secrets of the Eucharist

Now: $11.95
Was:
Pope John Paul II referred to the Holy Eucharist as "the greatest treasure of the Church," and yet even many devoted Catholics have a very limited understanding of this powerful sacrament. This book...

Now: $14.95
Was:
If you've been thinking about entrusting yourself to Mary for the first time or if you're simply looking to deepen and renew your devotion to her, 33 Days to Morning Glo

Now: $14.95
Was:
Vinny Flynn's new book 7 Secrets Of Confession reveals 7 key "secrets" or hidden truths about the great spiritual beauty, power and depth of Confession. The understanding that many Catholics have of...

Now: $19.95
Was:
In the powerful book The Day Is Now Far Spent by the acclaimed spiritual leader and best-selling writer, one he calls his "most important", he analyzes the profound spiritual, moral and...

Now: $16.95
Was:
Mark McNeil spent years in the Oneness Pentecostal movement: praying in its lively services, zealously spreading its unconventional teachings, and rejecting mainstream Christianity as misguided. He...

Go To Heaven: A Spiritual Road Map to Eternity

Now: $17.95
Was:
Why is it, asks Bishop Fulton Sheen, that one hears so often the expression Go to hell! and almost never the expression "Go to heaven!" Here, at his most penetrating, challenging, and...

Now: $18.95
Was:
In a time when technology penetrates our lives in so many ways and materialism exerts such a powerful influence over us, Cardinal Robert Sarah presents a bold book about the strength of silence. The...

Now: $13.95
Was: $17.95
Many Protestants call themselves “Bible Christians”—in contrast with Catholics, who ignore the Bible because they have the Church instead. Too many Catholics have taken this...

Five Proofs of the Existence of God

Now: $19.95
Was:
Five Proofs For The Existence of God provides a detailed, updated exposition and defense of five of the historically most important (but in recent years largely neglected) philosophical proofs of...

$21.95
Now: $15.95
Was: $22.95
What does the Church teach about that? Sometimes this seems like a question with more than one answer. The Catholic Church claims to possess the fullness of Christian truth, but getting to the truth...