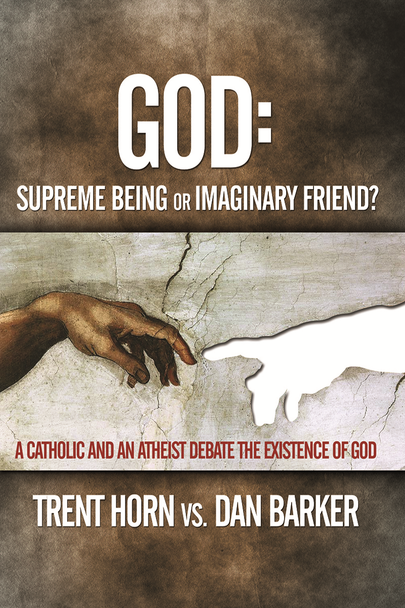 This debate from Wednesday, February 12, 2014 matches Catholic Answers apologist and author Trent Horn against Dan Barker, co-president of the Freedom from Religion Foundation.

Catholic Answers hosted the event to provide an opportunity for a lively yet respectful clash of ideas during which believers and unbelievers would be able to hear the best arguments for and against the existence of God.

The debate was attended by an overflow crowd of about 300, divided evenly between Christians and atheists. This debate includes argument, rebuttal, cross-examination, and an audience-participation question-and-answer session.

Now: $4.95
Was:
In Evidence For God, Trent not only answers the most common arguments for atheism; he presents a powerful case for the existence of God.

Now: $3.99
Was:
"I Am Who I Am" Who...or What...is God? Does the universe provide clues to God's existence? Why would a loving all-powerful God permit suffering in the world? What are some reasons to believe...

From Creation to Catholicism (Digital)

Now: $13.95
Was:
Are you able to explain to others the “big picture” of the Catholic Faith? Not just this teaching or that, but the whole story from beginning to end? In From Creation to...

Now: $10.95
Was:
Want to become a better apologist but don’t know where to start? Tired of being tongue-tied when your Catholic faith is attacked? Looking for a simple way to start out on the royal road of...

Now: $5.95
Was:
Leah Darrow offers her own story of sin and redemption as a case study in how damaging the current culture can be to women. In From Top Model To Role Model, Leah uses humor and heartfelt stories from...