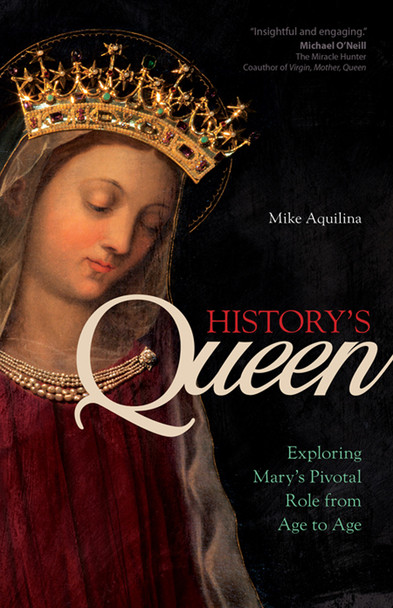 The Virgin Mary’s part in history doesn’t begin and end with her yes to God. Popular Catholic author Mike Aquilina points out that Mary is at the center of history from creation to the end of time and everywhere in between. In History’s Queen, you’ll learn about the many ways the mother of humanity has left her mark on the great events of time, not only as we see them in the Bible, but also in pivotal events such as Fatima, the battle of Lepanto, and the plague.

In this journey through two thousand years of Mary’s active participation in world events, each chapter of History’s Queen highlights a Marian intervention that is emblematic of a particular era, and opens our eyes to the ways in which Mary provides a vital key for understanding both our past and our future.

Mike Aquilina—author of The History of the Church in 100 Objects and editor of the Reclaiming Catholic History series—provides a fresh, fascinating, and classical view of history to today’s readers, exploring:

$9.95
Now: $5.00
Was: $9.95
Blood of Martyrs - Seed of the Church. Although a major period of Church history, the true story of the age of martyrdom is not well known. Revisionist historians dismiss as myth the persecution of...

History of the Catholic Church: From the Apostolic Age to the Third Millennium

Now: $34.95
Was:
The Catholic Church is the longest-enduring institution in the world. Beginning with the first Christians and continuing in our present day, the Church has been planted in every nation on earth. The...

Now: $5.95
Was:
Leah Darrow offers her own story of sin and redemption as a case study in how damaging the current culture can be to women. In From Top Model To Role Model, Leah uses humor and heartfelt stories from...

Rethinking Mary in the New Testament: What the Bible Tells Us about the Mother of the Messiah

Now: $17.95
Was:
Scholars often have questioned how much the New Testament can tell us about the Mother of Jesus. After all, Mary appears only in a few accounts and speaks on limited occasions. Can Scripture...

Now: $16.95
Was:
The greatest teacher who ever lived, Jesus knew how to reach his audience where they were at. Whether preaching to a group in parable or holding an intimate conversation, he had an unequaled ability...

Holy Handmaids of the Lord: Women Saints Who Won the Battle for Souls

Now: $14.95
Was:
Christ wants you to join in His saving work.He has called you to be a holy handmaid, a royal princess, a daughter of the Most High: a fighter alongside your King on the spiritual battlefield for...

Now: $4.95
Was:
There are two universal themes in human experience: 1) We all seek true, lasting happiness, and 2) We have trouble finding it, because the world is a messed-up place. In times of turmoil, when...

Now: $16.95
Was:
True devotion to the Sacred Heart of Jesus moves us to ponder the unrelenting love of Jesus, fully human and fully divine, as He poured Himself out for the world. In Behold This Heart, Fr. Thomas...

Now: $34.95
Was:
This latest book by the internationally acclaimed investigative journalism team is their most intriguing work to date.  For Vatican Secret Archives they had access to one of the most...