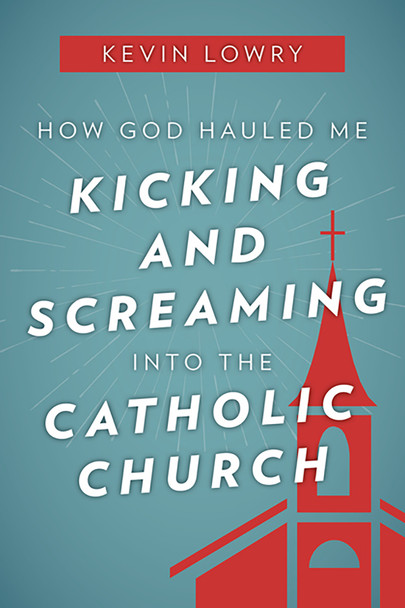 A preacher's kid at a Catholic university, Kevin Lowry settled into a “double major in beer and billiards” soon followed by uncomfortable run-ins with pious students, failing grades, increasing anxiety, a missing night—and the startling realization that some fellow students actually attended Mass the morning after a party instead of sleeping it off.

After getting kicked out, Kevin got his act together, got the MBA, and also got the girl. Meanwhile God was working, drawing him to the inevitable conclusion that Catholicism was all true despite his objections.

Kevin Lowry’s journey to Catholicism, How God Hauled Me Kicking and Screaming Into the Catholic Church, is fascinating, often funny, and demonstrates God’s unfailing, patient love for all of us.

Who Am I to Judge? Responding to Relativism with Logic and Love

Now: $16.95
Was:
"Don't be so judgmental!" "Why are Christians so intolerant?" "Why can't we just coexist?" In an age in which preference has replaced morality, many people find it difficult to speak the truth,...

The Old Evangelization: How To Spread The Faith Like Jesus Did

$14.95
Now: $11.95
Was: $15.95
It seems like every day somebody comes out with a new trick for bringing people into the Faith. Mixing pop psychology with spiritual fads and marketing jargon, these techniques seem to last only...

Now: $13.95
Was:
Deathbed Conversions contains the stories of famous people like John Wayne, Gary Cooper, Dutch Shultz, Patricia Neal, Oscar Wilde, and more -- we come to learn that a deathbed conversion is not a...

Now: $14.95
Was:
The Pope, devotion to Mary, confession ... just where are these topics in the Bible? Why does the Catholic Church seem to focus on so many things that aren t Scriptural? Or so thought former...

How to Share Your Faith with Anyone: A Practical Manual of Catholic Evangelization

$14.95
Now: $13.45
Was: $14.95
Recent popes have challenged all Catholics to participate in the New Evangelization. But most Catholics feel ill-equipped to take up the challenge. Terry Barber, founder of St. Joseph...

Now: $17.95
Was:
Over the course a single decade, dozens of students, alumni, and professors from a conservative, Evangelical seminary in North Carolina (Southern Evangelical Seminary) converted to Catholicism. These...

$14.95
Now: $1.00
Was: $16.95
Mark McNeil spent years in the Oneness Pentecostal movement: praying in its lively services, zealously spreading its unconventional teachings, and rejecting mainstream Christianity as misguided. He...

How to Do Apologetics: Making the Case for Our Faith

Now: $15.95
Was:
From one of the most respected names in Catholic Apologetics, Patrick Madrid, comes the new book How to Do Apologetics: Making the Case for Our Faith. And it couldn't be more timely. Seismic cultural...