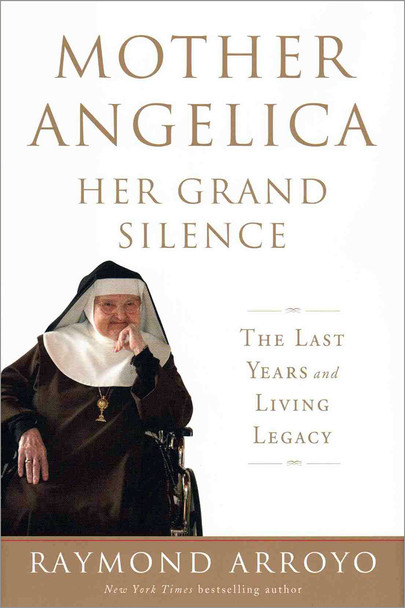 For more than a decade, the beloved, wise cracking nun who founded EWTN, the world’s largest religious media empire, was confined to her cell at Our Lady of the Angels Monastery in Hanceville, Alabama.  Though Mother Angelica is still seen and heard by millions each week in reruns on seven continents, the private drama within her monastery, her personal supernatural encounters, and the prolonged suffering she endured has remained hidden. Until now.

In a moving, dramatic conclusion to his four New York Times bestselling Mother Angelica books, Raymond Arroyo completes the saga of this singular nun with his most intimate book yet. Here are Mother Angelica’s spiritual battles in her cell—including encounters with the devil. Revealed for the first time is the personal request Mother made of God—which sheds light on her long silence.  Here are the unrevealed episodes of hilarity and inspiration; from playing possum (to avoid undesirable visitors to her room), to undertaking a secret trip to the far East, to blessing her nuns as they leave her care to create new monasteries, Mother Angelica’s spunky spirit shines through the narrative.

Mother Angelica Her Grand Silence, the touching, climactic coda to the Mother Angelica canon also offers readers the personal testimonies of people around the world who were spiritually transformed by Mother during her long public absence. And for the first time, the author writes movingly of his personal relationship with Mother—the highs and the lows.

Praying with Mother Angelica: Meditations on the Rosary and the Way of the Cross

$14.95
Now: $12.95
Was: $14.95
Mother Angelica’s meditations combine the spiritual insights of a master with the warmth of a loving mother. Her short but powerful reflections will lift your soul to Heaven and lead you into a...

$14.95
Now: $12.95
Was: $14.95
If you've been thinking about entrusting yourself to Mary for the first time or if you're simply looking to deepen and renew your devotion to her, 33 Days to Morning Glory is the right book to read...

Praying with Mother Angelica: Meditations on the Rosary and the Way of the Cross

$14.95
Now: $12.95
Was: $14.95
Mother Angelica’s meditations combine the spiritual insights of a master with the warmth of a loving mother. Her short but powerful reflections will lift your soul to Heaven and lead you into a...

Memorize The Reasons! Defending the Faith With the Catholic Art of Memory

$16.95
Now: $14.95
Was: $17.95
In his bestseller Memorize the Faith!, Kevin Vost rediscovered a memory method invented by the ancient Greeks and perfected by medieval scholars, and showed twenty-first-century Catholics how to use...

$19.95
Now: $17.95
Was: $19.95
Over 700 years ago, St. Thomas Aquinas perfected an easy method for his students to memorize most any information, but especially the truths taught by Christ and His Church. As the years passed, our...

$13.95
Now: $11.95
Was: $13.95
Deathbed Conversions contains the stories of famous people like John Wayne, Gary Cooper, Dutch Shultz, Patricia Neal, Oscar Wilde, and more -- we come to learn that a deathbed conversion is not a...

Now: $19.95
Was: $24.95
Are anti-Catholic Myths the original "Fake News"? Anti-Catholics like to paint Church teachings in a way that makes them seem vain, backward, or superstitious, all in the hope of drawing people out...

Now: $18.95
Was: $22.95
From the cross Jesus gave us his mother to be our mother, too: a singularly holy model, consoler, and intercessor for our spiritual journey. Yet most Protestants—and too many...

Finding God's Will For You

$19.95
Now: $17.95
Was: $19.95
Born a slave, raised a prince, and humbled in exile, Moses returned to confront the might Pharaoh with only a staff and the promise of God.In Moses: Signs, Sacraments, and Salvation, join Steve Ray...