Moving Heaven and Earth: The True Story of the Galileo Affair 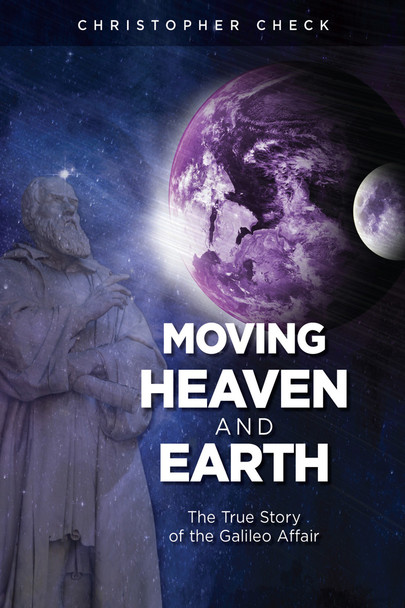 Moving Heaven and Earth: The True Story of the Galileo Affair

Given how often the Galileo situation is used as a stick to beat the Church and charge it with being “anti-science,” one might wonder whether it represents the greatest blunder in Catholic history. Certainly you could think that if all you knew were anti-Catholic claims, such as . . .

But every one of those “facts” is false, and the Vatican’s temporary injunction against printing Galileo’s works was withdrawn within a few decades. The controversy faded from view, but it was destined to come roaring back.

In it, he brings his historical expertise to bear and reveals what really happened in the Galileo incident.

This engaging and informative set exposes the dishonesty of  the common account and sifts the truths from the lies, giving you a clear view of these dramatic events.

You’ll come away with knowledge of the powerful personalities involved and their not-always-perfect motives.

Better yet, you’ll have a solid understanding of what the Church did—and why—allowing you to discuss the Galileo affair with confidence.

Chris gives you all the necessary background:

This dynamic audio set provides a powerful case for the harmony of faith and science, as well as a frank and honest look at the Galileo affair and the mistakes on both sides.

$9.95
Now: $8.95
Was: $9.95
Blood of Martyrs - Seed of the Church. Although a major period of Church history, the true story of the age of martyrdom is not well known. Revisionist historians dismiss as myth the persecution of...

$9.95
Now: $8.95
Was: $9.95
In the annals of history, perhaps no story sets itself so violently against the Catholic Church, and Catholic Spain as the black legend of the Inquisition. From claims of the most grotesque...

The Cristeros and the Martyrs of the Mexican Revolution

$9.95
Now: $8.95
Was: $9.95
Prepare yourself for one of the greatest Catholic war stories of all time. The average American's understanding of Mexican history is incomplete. American Catholics, however, should know Mexican...

$9.95
Now: $8.95
Was: $9.95
The Inspired Generalship Of The Peasant Girl Of Lorraine England and France had long been fighting over the domination of much of the French countryside by the time that St. Joan of Arc was born to...

$9.95
Now: $8.95
Was: $9.95
To believe Dan Brown and Ron Howard, the Knights of the Temple of Jerusalem guarded some secret and shocking knowledge the cardinals of the Catholic Church have long conspired to conceal...

War of the Vendee

$9.95
Now: $8.95
Was: $9.95
The Revolution in France is the defining event of modern times. It is when the impossible dreams of the Enlightenment became the horrifying nightmare of the Terror. The Revolution was a deliberate...

$21.95
Now: $18.95
Was: $21.95
What does the Church teach about that? Sometimes this seems like a question with more than one answer. The Catholic Church claims to possess the fullness of Christian truth, but getting to the truth...

$14.95
Now: $13.95
Was: $16.95
Mark McNeil spent years in the Oneness Pentecostal movement: praying in its lively services, zealously spreading its unconventional teachings, and rejecting mainstream Christianity as misguided. He...

Now: $15.95
Was: $24.95
Are anti-Catholic Myths the original "Fake News"? Anti-Catholics like to paint Church teachings in a way that makes them seem vain, backward, or superstitious, all in the hope of drawing people out...

$9.95
Now: $8.95
Was: $9.95
In the annals of history, perhaps no story sets itself so violently against the Catholic Church, and Catholic Spain as the black legend of the Inquisition. From claims of the most grotesque...

$13.95
Now: $8.95
Was: $13.95
Given how often the Galileo situation is used as a stick to beat the Church and charge it with being “anti-science,” one might wonder whether it represents the greatest blunder in...

$18.95
Now: $16.95
Was: $18.95
No other work on Galileo Galilei has brought together such a complete description of the historical context in its political, cultural, philosophical, religious, scientific, and personal aspects as...