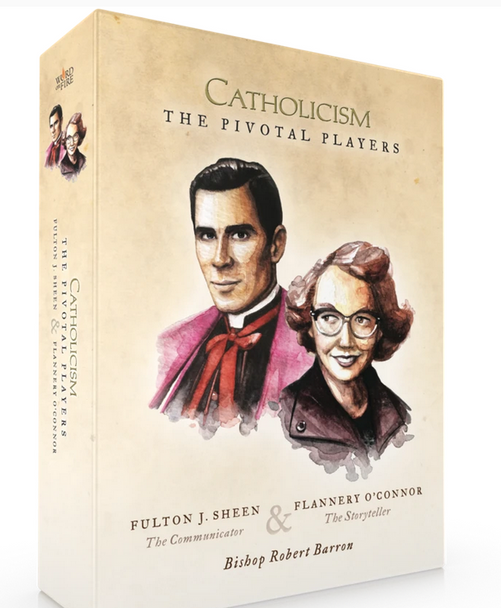 Long before the Internet and social media, Fulton Sheen pioneered Catholic evangelization through the media. At a time when most preachers spoke only from pulpits, Sheen used electronic media as a means to reach far beyond the parish walls. His innovative radio and television programs, beamed out to believers and skeptics alike, reached upwards of 30 million people per week. Sheen had a gift for spreading the faith clearly and persuasively, and he paved the path for today's media evangelists.

The Flannery O'Connor's influence on contemporary culture, particularly literature and film, is profound. Her novels and short stories have been described as shocking, convoluted, funny, and violent, and they are filled with unforgettably strange characters. But they are also, from beginning to end, haunted by Christ. O'Connor radically changes our idea of what religious fiction can be. Her startling prose awakens us to sin and, consequently, to the need for salvation.

Join Bishop Barron as he traces the lives and contributions of these two pivotal players.

$9.95
Now: $8.95
Was: $9.95
Written for soldiers by Msgr. Fulton Sheen in the darkest moments of World War II, this small prayer book has been proven in combat and hallowed by the suffering, prayers, and sacrifices of thousands...

$16.95
Now: $14.95
Was: $16.95
The Virgin Mary’s part in history doesn’t begin and end with her yes to God. Popular Catholic author Mike Aquilina points out that Mary is at the center of history from creation to the...

Why Be Catholic? (DVD)

$19.95
Now: $17.95
Was: $19.95
Don't you wish everyone you knew was Catholic? In his groundbreaking DVD, Why Be Catholic?, Catholic Answers Director of Apologetics Tim Staples, offers an engaging and simple solution: "Catholicism...

Now: $19.95
Was: $22.95
Fatima is a powerful and uplifting feature film that tells the dramatic true story of the apparitions of the Mother of God in 1917 to three shepherd children in Fatima, Portugal. The revelations from...

Detoxing You and Your Family From Tech

$19.95
Now: $17.95
Was: $19.95
Be honest: even with all the wonderful communications innovations in the last decade—smartphones and endless apps that make your life “better”—you’ve found yourself...

Now: $25.00
Was: $100.00
Five of Our Most Popular Tim Staples DVD Titles At a Special Price! Why Be Catholic? Defending the Faith Jimmy Swaggart Made Me Catholic Catholics and the Culture Wars Truth &...

God, the Universe, & Everything

$19.95
Now: $15.95
Was: $19.95
Where did we come from? Why are we here? Where are we going? Everyone wants the answers to these questions. Some people have found their answers in God; others are still on the path of discovery...

Now: $53.95
Was: $59.95
The Word on Fire Bible is a groundbreaking new book introducing readers to the strange, colorful world of the Bible.By surrounding the biblical text with commentary and explanations from Bishop...

Now: $35.95
Was: $39.95
The Word on Fire Bible is a groundbreaking new book introducing readers to the strange, colorful world of the Bible.By surrounding the biblical text with commentary and explanations from Bishop...

$34.95
Now: $31.95
Was: $34.95
This latest book by the internationally acclaimed investigative journalism team is their most intriguing work to date.  For Vatican Secret Archives they had access to one of the most...