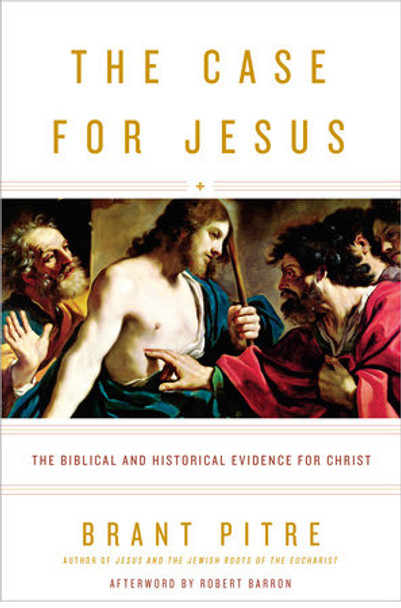 Over the past hundred years, scholars have attacked the historical truth of the Gospels and argued that they were originally anonymous and filled with contradictions. In The Case for Jesus, Brant Pitre taps into the wells of Christian scripture, history, and tradition to ask and answer a number of different questions, including:

As The Case for Jesus will show, recent discoveries in New Testament scholarship, as well as neglected evidence from ancient manuscripts and the early church fathers, together have the potential to pull the rug out from under a century of skepticism toward the apostolic authorship and historical truth of the traditional Gospels.

"I've lost count how many times I've heard critics say the Gospels are late, anonymous, and untrustworthy sources that don't prove Jesus was divine. At last there is a book that meticulously refutes these claims with an engaging discussion of the real Jesus that will benefit both scholars and laymen who read it." —Trent Horn, author of Answering Atheism

"Thanks to Dr. Pitre's magnificent book, you will now be equipped to make the case for Jesus and the veracity of the Gospels to even the most ardent skeptics. Perhaps more importantly, you will find your own faith reawakened." —Jennifer Fulwiler, radio host and author of Something Other Than God

“In The Case for Jesus, Pitre breaks his research down, in typically accessible prose, to bring us a readable and fascinating account of how questioning one accepted academic idea put him on a path of discovery that served to strengthen, not sever, his faith. Readers who loved Jesus and the Jewish Roots of the Eucharist will come away from this book with a similar sense of gratitude for such a faith-affirming presentation, and also a bit of awestruck wonder at how faith and reason can complement each other so well, when allowed to. I loved this book!” —Elizabeth Scalia, Author of Strange Gods: Unmasking the Idols in Everyday Life and Little Sins Mean a Lot

“Brant Pitre, who has already demonstrated his brilliant scholarship in earlier works, explains here in remarkably easy-to-understand ways why we can trust the Gospels. Behind his effective communication, however, is wide-ranging research and careful rethinking. In fact, this book has given me a number of important new matters to consider myself.” —Craig S. Keener, Asbury Theological Seminary

“The Case for Jesus topples the naïve skepticism that too often dominates the study of the Gospels by showing that the evidence for the truth of the Gospels is far stronger than is often assumed. Pitre has a unique talent for putting scholarly work of the highest caliber into an accessible and engaging form. This book should be on the shelf of every homilist, catechist, and Bible study leader.” —Mary Healy,  Sacred Heart Major Seminary

$19.95
Now: $10.00
Was: $19.95
Jesus of Nazareth was the most famous man in history—and certainly the most controversial. Was he the Son of God? A political revolutionary? Just a wise teacher whose followers turned his...

Now: $21.95
Was:
What was the early Church like? Contrary to popular belief, Rod Bennett shows there is a reliable way to know. Four ancient Christian writers—four witnesses to early Christianity —left...

Now: $18.95
Was:
Today’s popular champions of atheism are often called New Atheists, because they don’t just deny God’s existence (as the old atheists did)—they consider it their duty to scorn...

Academy of the Immaculate

Now: $5.95
Was:
A "must have" to deepen devotion to the Eucharist.A treasure of Eucharistic devotional writings and examples from the Saints showing their stirring Eucharistic love and devotion. Originally written...

A Catholic Introduction to the Bible: The Old Testament

Now: $54.95
Was:
Although many Catholics are familiar with the four Gospels and other writings of the New Testament, for most, reading the Old Testament is like walking into a foreign land. Who wrote these...