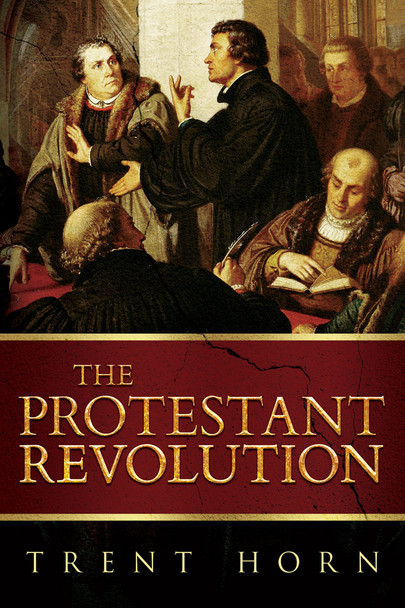 October 2017 marked the 500th anniversary of the Protestant Reformation, when, as the story goes, Martin Luther nailed a list of his grievances with the Catholic Church (commonly called "The 95 Theses") to the door of All Saints’ Church in Wittenberg, Germany.

In the documentary-style film The Protestant Revolution,  written and narrated by Trent Horn, you will be introduced to Martin Luther and the events that shaped his thinking and led him to “protest” against his Catholic Faith.

The film investigates common myths about the Reformation and the key ideas Luther espoused that resulted in the breaking away of believers and the establishment of non-Catholic Christian religions—ideas still firmly at the heart of modern Protestant theology. These include:

Along the way you’ll hear from top apologists Tim Staples, Jimmy Akin, Karlo Broussard, and Steve Weidenkopf as they unpack the misguided ideas of Luther, leaving you with a clearer understanding of your Protestant brothers and sisters and better equipped to engage them about what separates us and what unites us.

$16.95
Now: $14.95
Was: $18.95
One of the ways Jesus answered his critics was to use their own words against them—to show how even the enemies of the Faith admitted crucial facts that undermined their own position. That’s a...

$11.95
Now: $9.95
Was: $11.95
Getting to know the Church Fathers means getting to know our own roots. It means knowing more deeply who we are as we learn more and more about who they are. The early Christians are our ancestors,...

Now: $4.95
Was:
The Rupture of Christendom Who and what were the major figures and ideas of the Protestant Reformation?

Now: $16.95
Was: $20.95
Did the Catholic Church add extra books to the Bible? Or did Protestant leaders have them removed? Find out the truth! Some differences between Catholicism and Protestantism can be tricky to...

$19.95
Now: $10.00
Was: $19.95
The book of Revelation is the most mysterious book of the New Testament—and it’s often used to attack the Catholic Church. Opponents of the Church claim that it is the “Whore of...

Why We're Catholic: Our Reasons For Faith, Hope, And Love (Case of 20 Books)

Now: $60.00
Was: $299.00
Wouldn’t it be great to have a book to give non-Catholic or ex-Catholic friends and family to explain exactly why we believe what we believe? The good news is that now there is! Why...

Now: $18.95
Was: $23.95
From the cross Jesus gave us his mother to be our mother, too: a singularly holy model, consoler, and intercessor for our spiritual journey. Yet most Protestants—and too many...

$19.95
Now: $17.95
Was: $19.95
This is the most up-to-date, comprehensive, and thorough defense of the Catholic Church against Protestant objections in print. This book is especially relevant as the 500th anniversary of the...