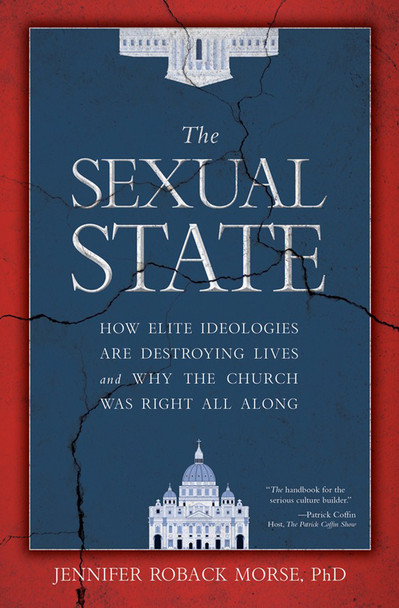 The Sexual Revolution—and the breakdown of the Family—has brought misery to millions.

In The Sexual State Jennifer Roback Morse shows that the Sexual Revolution did not just “happen” like a force of nature. Rather, it was deliberately created by “elites,” harnessing the power of the State, allowing them inflict three false and calamitous ideologies—contraception, divorce, and gender—that have led to widespread and profound unhappiness, and worse.

The ideas of the Sexual Revolution did not emerge from the lived experiences of ordinary people, the government has been imposing the morality of an out-of-touch elite class on the rest of us for decades.

The Sexual State turns the conventional wisdom on its head to reveal how:

Social conservative ideas and traditional Catholic morality are getting clobbered. And the dirty secret that no one wants to acknowledge—until now!—is that the progressive social elites have rigged the system. Most people don’t love abortion, or divorce, or single-parent families! Thankfully, Dr. Morse, and the Catholic Church, have the answer. It is vital that those who would change the culture understand how we got there, otherwise, the countering tactics will remain impotent.

In this masterful take-down of the Sexual Revolution and its promoters, Morse calls for a widespread adherence to the principles of the Church. Only then will our society recover from the misrule of the “elites” and the “managerial class.”

Now: $0.99
Was:
Today homosexual activists are demanding the legalization of same-sex “marriage.” In some places they have even achieved this goal. They assert that this is a matter of equality. If...

Now: $19.95
Was:
After half a century, how has the teaching of Pope Paul VI on marriage and birth control, presented in his encyclical Humanae vitae (On Human Life), held up? Very well, says philosopher Janet Smith...

Society and Sanity: Understanding How to Live Well Together

Now: $17.95
Was:
If there are two words that seem not to fit together they are "society" and "sanity". Spend twenty minutes on the freeway or ten minutes reading the newspaper, or ponder the religious and...

The Anti-Mary Exposed: Rescuing the Culture from Toxic Femininity

Now: $27.95
Was:
The Demonic Influence on Women Today In the late ’60s, a small group of elite American women convinced an overwhelming majority of the country that destroying the most fundamental of...

Now: $16.95
Was:
Doctor Joseph Nicolosi says of Making Gay Okay: How Rationalizing Homosexual Behavior Is Changing Everything  - "If you read only one book on homosexuality, natural law theory, and the radical...

Now: $1.00
Was: $16.95
Love and beauty.   From when she was a little girl, Dawn Eden Goldstein knew she wanted those things—that in them, somehow, she would find God. But her life’s search led her...

Now: $16.95
Was:
Mark McNeil spent years in the Oneness Pentecostal movement: praying in its lively services, zealously spreading its unconventional teachings, and rejecting mainstream Christianity as misguided. He...