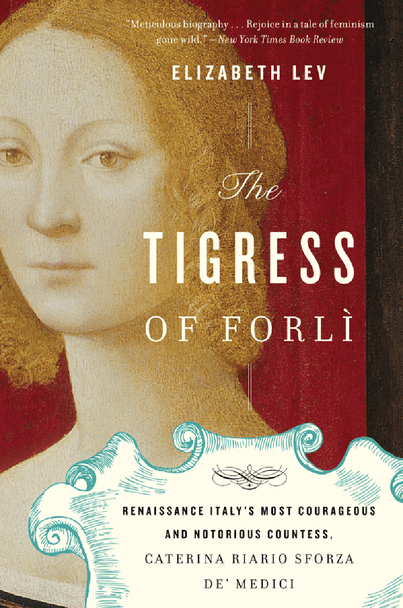 A strategist to match Machiavelli; a warrior who stood toe to toe with the Borgias; a wife whose three marriages would end in bloodshed and heartbreak; and a mother determined to maintain her family’s honor, Caterina Riario Sforza de’ Medici was a true Renaissance celebrity, beloved and vilified in equal measure. In this dazzling biography, Elizabeth Lev illuminates her extraordinary life and accomplishments.

Raised in the court of Milan and wed at age ten to the pope’s corrupt nephew, Caterina was ensnared in Italy’s political intrigues early in life. After turbulent years in Rome’s papal court, she moved to the Romagnol province of Forlì. Following her husband’s assassination, she ruled Italy’s crossroads with iron will, martial strength, political savvy, and an icon’s fashion sense. In finally losing her lands to the Borgia family, she put up a resistance that inspired all of Europe and set the stage for her progeny—including Cosimo de’ Medici—to follow her example to greatness.

A rich evocation of Renaissance life, The Tigress of Forlì reveals Caterina Riario Sforza as a brilliant and fearless ruler, and a tragic but unbowed figure.

Now: $1.00
Was:
Looking for the perfect tool to help you evangelize non-Catholics? Columna de Fuego, Columna de la Verdad is the Spanish translation of the popular Pillar of Fire, Pillar of Truth.  It's a...

Holy Handmaids of the Lord: Women Saints Who Won the Battle for Souls

Now: $14.95
Was:
Christ wants you to join in His saving work.He has called you to be a holy handmaid, a royal princess, a daughter of the Most High: a fighter alongside your King on the spiritual battlefield for...

Now: $19.95
Was:
The book of Revelation is the most mysterious book of the New Testament—and it’s often used to attack the Catholic Church. Opponents of the Church claim that it is the “Whore of...

The Fisherman's Tomb: The True Story of the Vatican's Secret Search

Now: $21.95
Was:
A Texas oilman. A brilliant female archaeologist. An unknown world underneath the Vatican. In 1939, a team of workers beneath the Vatican unearthed an early Christian grave. This surprising...

Now: $3.95
Was:
In his best-selling booklet Absolute Relativism: The New Dictatorship and What to Do About It, Chris Stefanick tackles all the tough questions about Relativism by showing how bankrupt and impractical...

Now: $14.95
Was:
The renaissance of Catholic apologetics has done great good for the Church. Ordinary Catholics are learning how to defend and explain the Faith—and to share it enthusiastically with...

Now: $21.95
Was:
How can the Crusades be called “glorious”? Our modern mindset says they were ugly wars of greed and religious intolerance—a big reason why Christians and Muslims today can’t...