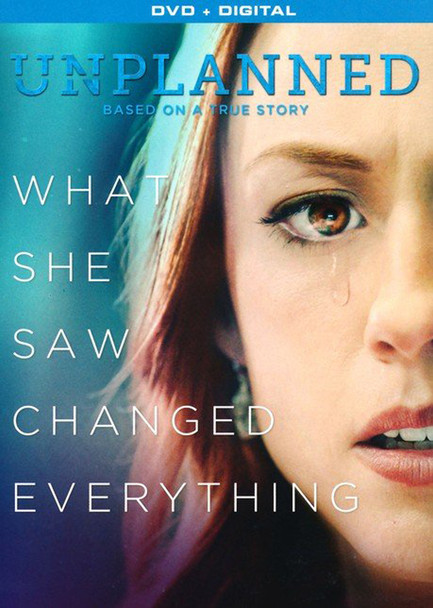 A film that speaks to one of the most polarizing topics of our day. Unplanned brings us an eye opening look inside the abortion industry from a woman who was once its most passionate advocate.

After reading Abby Johnson's best selling book of the same title, the writers were moved to bring this inspiring true story to the big screen, giving voice to a woman who has been on both sides of the abortion debate.

Unplanned is the most important movie you'll ever see on the most controversial issue of our time. No matter which side of the fence you're on, no one will leave this film unmoved by Abby's journey. Rated R. English and Spanish audio. English SDH and Spanish subtitles . Approx. 106 minutes.

$19.95
Now: $10.00
Was: $19.95
We will lose the fight for America if we don’t stop and answer one simple question—What went wrong?American society has changed dramatically—and for the worse. We’re already at the point where the...

$19.95
Now: $10.00
Was: $19.95
No matter how hard you try, talking with your friends and family about abortion too often winds up at one extreme or the other—either tempers and emotions get out of hand or to keep the peace you...

$19.95
Now: $10.00
Was: $19.95
Is the Church wrong on contraception? In a world that practically worships the pursuit of sexual pleasure, the Catholic Church’s teaching on contraception can seem unintelligible. Critics say it is...

Now: $14.95
Was: $17.95
Many Protestants call themselves “Bible Christians”—in contrast with Catholics, who ignore the Bible because they have the Church instead. Too many Catholics have taken this...

Now: $9.95
Was: $11.95
Can hearts really be changed on the issue of abortion?Changing Sides tells the powerful true story of the conversion of a dedicated Planned Parenthood director to a leading Pro-life Activist. Abby...

Now: $16.95
Was: $18.95
About a century after Jesus died, a battle began for the Old Testament. Large numbers of faithful Christians fought about its contents and even about its right to be called a Christian book! On...

Now: $18.95
Was:
Everybody’s favorite Catholic outer-space delivery pilots return for their greatest adventure yet in Weapons of War!   Fresh from saving the solar system while being introduced to God...

$19.95
Now: $10.00
Was: $19.95
These subjects have fascinated people for centuries, and the Bible has a surprising amount to say about each of them. Jimmy Akin has spent years studying the mysterious, and in this set he shares...

The Bible Is a Catholic Book - Case of 20 Books

Now: $60.00
Was: $339.00
Many Protestants call themselves “Bible Christians”—in contrast with Catholics, who ignore the Bible because they have the Church instead. Too many Catholics have taken this...

$19.95
Now: $10.00
Was: $19.95
The apostles preached and preserved the Faith they received from Jesus. This is the story of what happened next. In The Very First Fathers, Jimmy Akin (author of the best-selling book The...