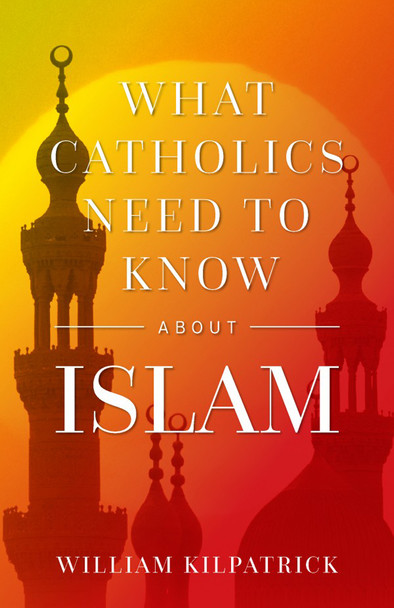 It is no longer permissible to have an honest conversation about Islam. Those who warn about Islam’s threat to our way of life are dismissed as racists and xenophobes by social elites and even by many in the Catholic hierarchy.

For centuries, the Catholic Church served as a bulwark against Islamic expansion. Today the Church is an enabler of Islam, encouraging mass migration into the West and portraying Islam as a peace-loving religion that has nothing to do with terrorism.

In his highly informative, hard-hitting book, What Catholics Need to Know About Islam, Catholic author William Kilpatrick pulls no punches in courageously confronting the threats posed by Islam. He shows how Muslim activists are employing the same tactics that led to the meteoric rise of the LGBT movement and how they have systematically infiltrated the government, media, business, schools, and even churches.

He explains how Western self-hatred and political correctness makes jihad possible, and he reveals how the media conceals and covers up for atrocities committed in the name of Islam.

In many European countries, you can be arrested for criticizing Islam. Meanwhile, desecration of churches is on the rise, police fear to enter Muslim zones, and London has become the acid-attack capital of the world. Europe is slowly capitulating to Islam, writes Kilpatrick, and the same can happen here if we don’t wake up in time.

Among the many urgent topics covered in this compelling book are:

What You Need to Know About Exorcism: The Devil, Evil Spirits, and Spiritual Warfare (MP3)

Now: $10.95
Was:
Is belief in the devil a relic of a superstitious past? Has science made the devil obsolete? Is Satan merely a metaphor in the Bible for the mystery of evil? Nothing could be farther from the truth...

Now: $1.99
Was:
Islam: A Catholic Perspective provides a concise overview of Islam -- and evaluates their history and beliefs from a Christian point of view. Using a balanced approach, this booklet gives Islam...

Salvation: What Every Catholic Should Know

Now: $16.95
Was:
At every Sunday Mass, Catholics confess that Jesus came down from heaven “for us men and for our salvation.” But what does “salvation” mean? In this robust and accessible book, Scripture scholar...

To Know St Joseph: What Catholic Tradition Teaches About the Man Who Raised God

Now: $16.95
Was:
He’s the Patron of the Universal Church, guardian of the Word Made Flesh, supreme help of fathers and workers, and Terror of Demons. After Jesus and Mary, he’s our single greatest model of holiness...

To Know St Joseph: What Catholic Tradition Teaches About the Man Who Raised God (Digital)

Now: $12.99
Was:
He’s the Patron of the Universal Church, guardian of the Word Made Flesh, supreme help of fathers and workers, and Terror of Demons. After Jesus and Mary, he’s our single greatest model of holiness...

Now: $12.95
Was:
Just what do Christians need to know about the Qur'an?  In The Bible And The Qur'an Father Jacques Jomier, O.P., has written a scholarly yet readable work that details the profound differences...

Now: $21.95
Was:
Are anti-Catholic Myths the original "Fake News"? Anti-Catholics like to paint Church teachings in a way that makes them seem vain, backward, or superstitious, all in the hope of drawing people out...