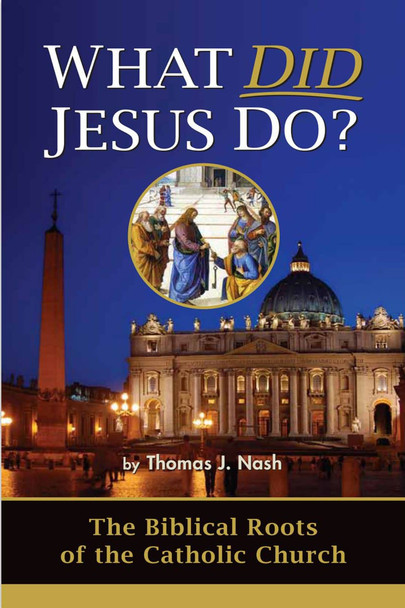 'Who CARES what Jesus did?' This may well be the response of many to the title of this book. Some may shrug it off because of a general disbelief in God, or a refusal to believe that Jesus could actually be the Incarnate Word, i.e., the eternal Son of God who became man. Others may acknowledge that Jesus is an inspiring moral teacher, and yet find some of his hard sayings (Jn. 6:60) too onerous to live and/or far-fetched to accept. Still others may be turned off by a history of bad experiences with professed Christians, and so see Jesus as a polarizing figure. Further, there are Christians who believe in Jesus as their Savior, but who disagree that he founded the Catholic Church. And there can be overlap among these different reasons.

In What Did Jesus Do? Tom Nash seeks to present anew the real Jesus, the Word [who] became flesh (Jn. 1:14) to save all of humanity and to employ his Mystical Bride, the Catholic Church, as his instrument of salvation and life-transforming love (Mt. 16:18-19; Jn. 10:10). Nash makes various biblical and other historical arguments for the perennial relevance of Jesus and his Church, including that anti-Catholicism makes for the strangest of bedfellows, with many unexpectedly finding the devil and his devotees lining up with them against the Church.

As Nash summarizes well, if the Catholic Church were merely a human institution, she would've entered the dustbin of history centuries ago, both because of internal scandals and external persecutions. Instead, 2,000 years after the Resurrection, the Church continues to advance her God-given Great Commission (Mt. 28:18-20).

Now: $14.95
Was:
The title explains itself. But it’s misleading. There are more than 40 reasons. In fact, there are at least ten to the 82nd power, which, we are told, is the number of atoms in the universe...

Now: $10.37
Was: $19.95
Did the Catholic Church add extra books to the Bible? Or did Protestant leaders have them removed? Find out the truth! Some differences between Catholicism and Protestantism can be tricky to...

Why I Am Catholic (and You Should Be Too)

Now: $19.95
Was:
With atheism on the rise and millions tossing off religion, why would anyone consider the Catholic Church? Brandon Vogt, a bestselling author and the content director for Bishop Robert Barron's Word...

The Biblical Roots of the Mass

Now: $19.95
Was:
In this profoundly insightful and highly readable book, Thomas Nash brilliantly refutes the common charge that the Mass is “unbiblical.” As you’ll discover, the story of the Mass...

Academy of the Immaculate

Now: $5.95
Was:
A "must have" to deepen devotion to the Eucharist.A treasure of Eucharistic devotional writings and examples from the Saints showing their stirring Eucharistic love and devotion. Originally written...

Now: $12.97
Was: $24.95
Are anti-Catholic Myths the original "Fake News"? Anti-Catholics like to paint Church teachings in a way that makes them seem vain, backward, or superstitious, all in the hope of drawing people out...

$21.95
Now: $11.41
Was: $21.95
What does the Church teach about that? Sometimes this seems like a question with more than one answer. The Catholic Church claims to possess the fullness of Christian truth, but getting to the truth...

Now: $15.95
Was:
These meditations on Mary are filled with wisdom and hope. On ordinary days, on Marian holy days, and in times of spiritual and moral challenges, they offer the strength and the consolation...

Now: $14.95
Was:
The Pope, devotion to Mary, confession ... just where are these topics in the Bible? Why does the Catholic Church seem to focus on so many things that aren t Scriptural? Or so thought former...

$22.95
Now: $12.97
Was: $24.95
The essence of Christianity is this: we hold fast to what we were given by those who came before us. From Jesus and the apostles to believers throughout history, God’s saving revelation...