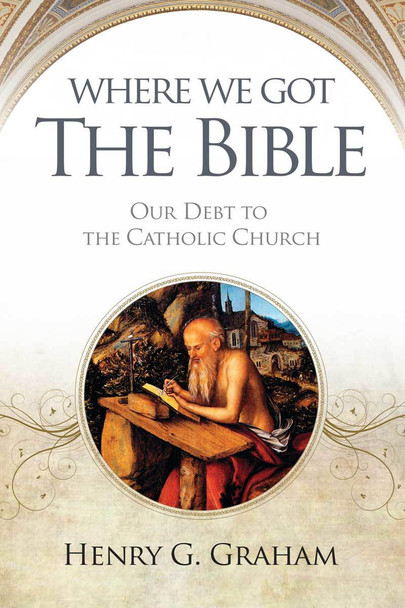 Learn about the history of the Bible and the Church’s important role in preserving it.

Who compiled the biblical text?

Who organized the text?

How was the Bible preserved?

What role does the Bible play in the Catholic Faith?

In Where We Got the Bible, Bishop Henry G. Graham explains how the Catholic Church compiled the sacred text, how medieval monks preserved it, and how Catholic scholars first gave Christians the Bible in their own languages. Along the way, Graham refutes myths about Catholic opposition to Scripture.

To his lively history of the Bible is added his conversion story, From the Kirk to the Catholic Church. Brought up a Calvinist in Scotland, Graham became a minister but found himself irresistibly drawn to the Catholic Faith, eventually becoming a bishop.

Beginning Apologetics 7: How To Read The Bible

$5.95
Now: $5.45
Was: $5.95
Because of its significance in the life of faith, it is extremely important to read Sacred Scripture well, that is, correctly and fruitfully. To effectively understand the Bible, we should know a...

Now: $15.95
Was: $19.95
Did the Catholic Church add extra books to the Bible? Or did Protestant leaders have them removed? Find out the truth! Some differences between Catholicism and Protestantism can be tricky to...

Now: $19.95
Was: $24.95
Are anti-Catholic Myths the original "Fake News"? Anti-Catholics like to paint Church teachings in a way that makes them seem vain, backward, or superstitious, all in the hope of drawing people out...

Now: $23.95
Was: $26.95
What Did Early Christians Really Believe? The Answer Will Surprise and Amaze You!The Fathers Know Best: Your Essential Guide to the Teachings of the Early Church is a unique resource that introduces...

Now: $18.95
Was: $22.95
From the cross Jesus gave us his mother to be our mother, too: a singularly holy model, consoler, and intercessor for our spiritual journey. Yet most Protestants—and too many...

$16.95
Now: $13.95
Was: $17.95
One of the ways Jesus answered his critics was to use their own words against them—to show how even the enemies of the Faith admitted crucial facts that undermined their own position...

Beginning Apologetics 7: How To Read The Bible

$5.95
Now: $5.45
Was: $5.95
Because of its significance in the life of faith, it is extremely important to read Sacred Scripture well, that is, correctly and fruitfully. To effectively understand the Bible, we should know a...

The Apostasy That Wasn't: The Extraordinary Story of the Unbreakable Early Church

Now: $19.95
Was: $24.95
The theory goes like this: Just a few centuries after Christ’s death, around the time the Roman Empire converted to Christianity, the true Faith suffered a catastrophic falling-away. The simple...