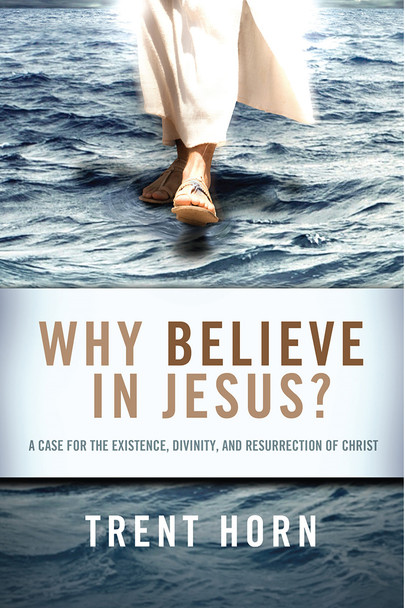 Jesus of Nazareth was the most famous man in history—and certainly the most controversial.

Was he the Son of God? A political revolutionary? Just a wise teacher whose followers turned his memory into legend? Or maybe he didn’t exist at all… except as a fanciful mixture of ancient myths.

With so many competing versions of Jesus to choose from, how can we know that traditional Christian teaching about him is true—in fact, that it is worthy of our faith?

In Why Believe in Jesus?, apologist Trent Horn examines the historical, biblical, and logical evidence to build a compelling case for the reasonableness of belief in the Christian Jesus: that he was truly God incarnate in first-century Judea, put to death on a cross and risen on the third day.

Along the way, Horn debunks common myths about Jesus, both popular and scholarly, that try to compete with the Christian understanding. For example, he shows:

In the gospels Jesus asks, “Who do you say that I am?” Watch Why Believe in Jesus? and be readied to answer that question with knowledge, confidence, and faith.

$22.95
Now: $19.95
Was: $22.95
Over the past hundred years, scholars have attacked the historical truth of the Gospels and argued that they were originally anonymous and filled with contradictions. In The Case for Jesus, Brant...

The Three Secrets To Sharing The Faith

$21.95
Now: $10.00
Was: $21.95
Want to tell others about your Catholic faith, but don’t how where to start? Afraid you’re not smart enough, knowledgeable enough, outgoing enough? Don’t worry, says Catholic Answers apologist Trent...

$22.95
Now: $19.95
Was: $22.95
Over the past hundred years, scholars have attacked the historical truth of the Gospels and argued that they were originally anonymous and filled with contradictions. In The Case for Jesus, Brant...

Why You Can Trust The Gospels

$19.95
Now: $10.00
Was: $19.95
Every Christmas and Easter, the publishing industry comes out with a new, sensational story that claims to offer the “truth” about Jesus and the Gospels. Every time, the claim is...

The Three Secrets To Sharing The Faith

Now: $4.45
Was: $4.95
The Man. The Myth? Did Jesus even exist? How can we trust what the Bible says about him? Didn’t Jesus’ followers invent a lot of myths about him based on stories of pagan...

Defending Your Faith: How to Counter Standard Objections to Catholicism

$19.95
Now: $10.00
Was: $19.95
The most common charge non-Catholic Christians make against the Catholic Church is that the tenets of Catholicism are man-made and unbiblical. Those are serious charges, for sure. But can you refute...