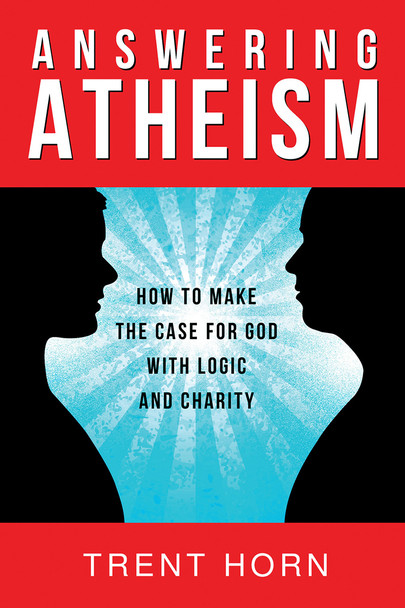 Today’s popular champions of atheism are often called New Atheists, because they don’t just deny God’s existence (as the old atheists did)—they consider it their duty to scorn and ridicule religious belief. But there’s nothing really “new” about their arguments. They’re the same basic objections to theism that mankind has wrestled with for centuries.

We don’t need new answers for this aggressive modern strain of unbelief: We need a new approach.

In Answering Atheism, Trent Horn responds to that need with a fresh and useful resource for the God debate, combining a thorough refutation of atheist claims with a skillfully constructed case for theism based on reason and common sense. Just as important, he advocates a charitable approach that respects atheists’ sincerity and good will—making this book suitable not just for believers but for skeptics and seekers too.

Meticulously researched, and street-tested in Horn’s work as a pro-God apologist, Answering Atheism tackles all the major issues of the debate, including:

With the secularistic modern world turning increasingly hostile to religious believers, it has never been more important to be able to defend the basic reasonableness of theism.

Read Answering Atheism and become thoroughly equipped to rebut atheists’ challenges—and to share with them the good news that God is real.

“I've read many works of popular apologetics; this is the best.”  —Stephen Bullivant, editor, The Oxford Handbook of Atheism

”Answering Atheism gets high grades on the three R's: It is readable, reasonable, and researched. Its defense of the cosmological argument has depth and detail, yet it is not so technical that you need to take a philosophy course to comprehend it.” —Peter Kreeft, professor of philosophy, Boston College

“If you read only one book that that shows the reasonableness and beauty of belief in God, it should be Trent Horn’s Answering Atheism.” —Kevin Vost, author, Memorize the Reasons!

Now: $19.95
Was:
How did we get here?How did everything get here – our planet, our solar system … our universe?Physics provides the fundamental suggestion of a beginning and fine-tuning of the universe...

Now: $19.95
Was:
Today’s popular champions of atheism are often called New Atheists. But there’s nothing really “new” about their arguments. They’re the same basic objections to God that...

Now: $16.95
Was:
Are you scared to talk about abortion? Don’t worry—almost everyone is. Either we think the subject is too impolite, or we don’t want to be branded an intolerant fanatic, or...

Now: $3.95
Was:
Life’s Ultimate Questions How can you know for sure that God exists? If God is good, why is there so much evil in the world? Doesn’t evolution mean we don’t need God to...

Now: $22.95
Was:
Do you want to learn how to defend and explain… The existence of God… The reliability of the Bible… The Real Presence of Christ in the Eucharist… The authority of...

Answering Atheism: How to Make the Case for God with Logic and Charity (Digital)

Now: $9.99
Was:
Today’s popular champions of atheism are often called New Atheists, because they don’t just deny God’s existence (as the old atheists did)—they consider it their duty to scorn...

What the Saints Never Said: Pious Misquotes And The Subtle Heresies They Teach You