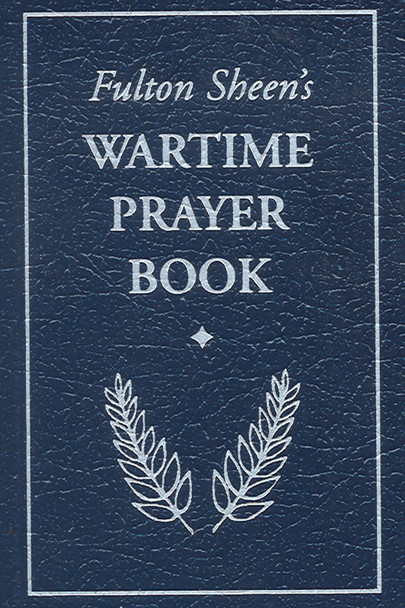 Written for soldiers by Msgr. Fulton Sheen in the darkest moments of World War II, this small prayer book has been proven in combat and hallowed by the suffering, prayers, and sacrifices of thousands of Catholic fighting men and women on ships, submarines, and aircraft, in fortresses and foxholes, and even in hellish prisoner of war camps across Europe and the Pacific.

New enemies have shattered the security those good soldiers won sixty years ago.

Terrorism now takes as its battlefield our homes, our schools, and our workplaces, threatening even those of us who are not in the military.

Fulton Sheen's Wartime Prayer Book,is now available in a pocket-sized leatherette edition similar to the original that you can carry with you in your car or on the subway, and that soldiers can carry in their uniforms as they face the enemy.

$15.95
Now: $14.35
Was: $15.95
In 2000, Pope John Paul II canonized the great 20th century visionary of Divine Mercy, Sister Faustina Kowalska, and proclaimed the Sunday after Easter to be celebrated annually as Divine Mercy...

$14.95
Now: $13.45
Was: $14.95
Vinny Flynn's new book 7 Secrets Of Confession reveals 7 key "secrets" or hidden truths about the great spiritual beauty, power and depth of Confession. The understanding that many Catholics have of...

$14.95
Now: $13.45
Was: $14.95
This updated edition contains the new translations for the Mass. This beautiful prayer book is compact enough to carry everywhere and comprehensive enough to give you inspiration and uplift in almost...

$14.95
Now: $13.45
Was: $14.95
This updated edition contains the new translations for the Mass. This beautiful prayer book is compact enough to carry everywhere and comprehensive enough to give you inspiration and uplift in almost...

Go To Heaven: A Spiritual Road Map to Eternity

Getting The Marriage Conversation Right: A Guide For Effective Dialogue

$6.95
Now: $5.95
Was: $6.95
Getting the Marriage Conversation Right: A Guide for Effective Dialogue teaches you how to promote and defend traditional marriage in non-religious terms. It’s a great “how to”...

Illustrated Lives Of The Saints

An Exorcist Explains the Demonic: The Antics of Satan and His Army of Fallen Angels

$14.95
Now: $13.45
Was: $14.95
From Fr. Gabriel Amorth, the renowned exorcist in Rome, comes this powerful, eye-opening book on the deadly antics of Satan and his fallen angels, as well as spiritual remedies for each. An Exorcist...

$14.95
Now: $9.95
Was: $14.95
Your mission: Proclaim the Good News Your weapons: Faith and reason—and the power of the Holy Spirit Your opposition: The world, the flesh, and the devil When Dan McGuire was an officer in...