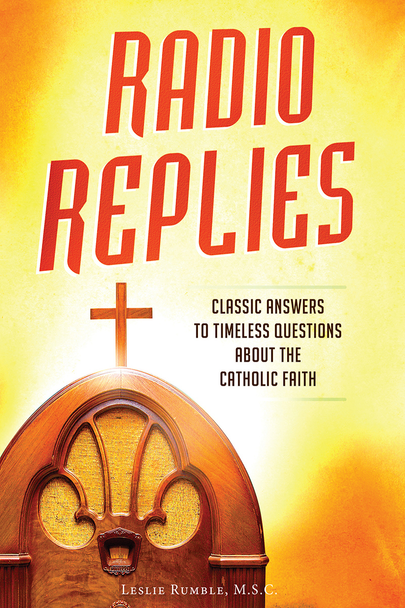 A must-have for every Catholic’s bookshelf!

Father Leslie Rumble was the godfather of radio apologists and one of the Catholic media superstars of his day.

During the 1920s and 30s his show helped millions of people understand and explain the teachings of Catholicism.

Then his Radio Replies books—a three-volume set collecting the best questions and answers from his show—helped millions more, becoming one of the most beloved resources of the modern apologetics renaissance.

Now Radio Replies is back and better than ever!

Catholic Answers has taken the thousands of questions from the original three volumes and pared them to a single volume that eliminates duplicate or dated entries.

The result is an attractive and readable edition that makes Fr. Rumble’s wisdom, wit, and witness more accessible than ever before. From the Bible to baptism; from Christian morality to the marks of the Church; from the nature of man to the evidence for God in nature; Radio Replies is a one-stop shop for smart and sound information about the Catholic Faith.

Now: $21.95
Was: $26.95
Being Catholic isn't easy.  Every Catholic will come face-to-face with anti-Catholic attacks that are launched against the Faith.  Don't you owe it to yourself to make sure you have the...

$4.99
Now: $2.99
Was: $4.99
The Church’s teaching on sexual morality – never will change because it never can change. In a world where modern culture treats sexuality as a theme park for adults instead of as a...

Now: $2.95
Was: $3.95
Does the Bible say we’re saved by faith alone? Is there a difference between justification and sanctification? How do Catholics understand the cooperative roles of faith and works in our...

$9.99
Now: $7.99
Was: $9.99
Being Catholic isn't easy. Every Catholic will come face-to-face with anti-Catholic attacks that are launched against the Faith. Don't you owe it to yourself to make sure you have the very best...

$9.99
Now: $7.99
Was: $9.99
Do you want to learn how to defend and explain… The existence of God… The reliability of the Bible… The Real Presence of Christ in the Eucharist… The authority of the pope...

$9.99
Now: $7.99
Was: $9.99
What Did Early Christians Really Believe? The Answer Will Surprise and Amaze You! The Fathers Know Best: Your Essential Guide to the Teachings of the Early Church is a unique resource that...

$3.99
Now: $2.99
Was: $3.99
“Where Is That in the Bible?” Fundamentalists — and many other Protestants — use this question all the time, particularly when they’re dealing with Catholics. When...

$0.99
Now: $0.79
Was: $0.99
In the new revised edition of his booklet from Catholic Answers, Mass Appeal: the ABC's of Worship, Jimmy Akin masterfully walks you through the Mass from beginning to end, explaining precisely what...

$9.99
Now: $7.99
Was: $9.99
What does the Church teach about that? Sometimes this seems like a question with more than one answer. The Catholic Church claims to possess the fullness of Christian truth, but getting to the truth...