The Early Church Was the Catholic Church 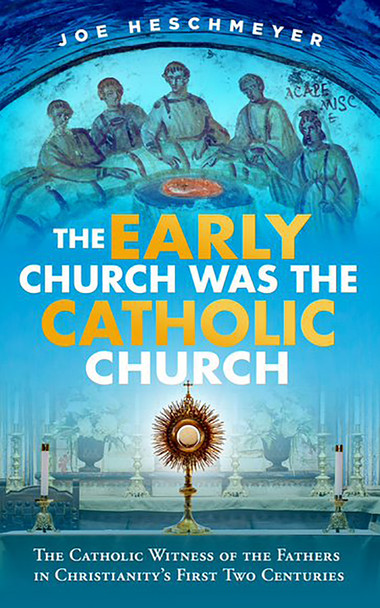 The Early Church Was the Catholic Church

When it comes to the history of Christianity, the Catholic Church makes a pretty bold claim: that the earliest Christians were Catholics—and that their beliefs and practices have continued unbroken all the way to the present-day Church.

But the Last Supper was a long time ago, and for hundreds of years Protestants have been attacking Catholic claims about Christianity’s historic origins, traditions, and practices. They prefer to believe that the earliest, “purest” Church had much more in common with their own congregations and doctrines.

So, how can you be sure the Catholic Church has it right?

You’ll get your answer from Joe Heschmeyer (Pope Peter, A Man Called Joseph), who deftly joins the Catholic past and present in The Early Church Was the Catholic Church. Focusing on the first two centuries (before any Roman “apostasy” is said to have taken place) and bedrock principles of Christian belief, authority, and worship, Heschmeyer digs deep into the words and actions of those who lived right after the apostles to refute anti-Catholic claims of how the Faith was practiced “back then.”

Early Christianity is not some mist-enshrouded island of the distant past that was waiting for the Protestant Reformers to rediscover it. No, it’s recognizable and familiar: the beginning of a Spirit-guided line of faith leading directly to today’s Catholic Church. If you want to learn to defend that Church at its roots—or if you’re just curious about what our eldest Christian brothers and sisters believed—you can expect in these pages to be richly rewarded.

$21.95
Now: $9.95
Was: $21.95
All Catholics who want to know and defend the Faith need to learn about the time of the apostles and the Fathers, for it is in these ages that the Trinitarian, Christological, and Marian doctrines...

Now: $2.95
Was: $4.95
To deepen your knowledge of this exciting time in Christian history, join the Catholic Answers apologists for the Q & A Session at our 2019 conference, The Early Church Was the Catholic Church...

Revolt Against Reality: Fighting the Foes of Sanity and Truth - From the Serpent to the State

Now: $13.95
Was: $17.95
We seem to be living in an age of insanity. Crimes against children, born and unborn; marriage defiled and redefined; the madness of transgenderism; the looming terror of trans-human-ism . . . the...

Light From Darkness: Nine Times the Church was in Turmoil, and Came Out Stronger Than Before

Now: $15.95
Was: $19.95
Ask Catholics about the crisis in the Church today and you’ll often get one of two responses: The end is upon us! or Everything’s fine—the Holy Spirit is in charge! Neither of those...

Now: $14.95
Was: $16.95
The papacy is no stranger to controversy. In many ways it’s Catholicism’s defining doctrine—but also its most divisive. From medieval pontiffs who acted like princes to a modern...

Now: $13.95
Was: $16.95
Many Protestants call themselves “Bible Christians”—in contrast with Catholics, who ignore the Bible because they have the Church instead. Too many Catholics have taken this...

Now: $15.95
Was: $24.95
Are anti-Catholic Myths the original "Fake News"? Anti-Catholics like to paint Church teachings in a way that makes them seem vain, backward, or superstitious, all in the hope of drawing people out...

To Know St Joseph: What Catholic Tradition Teaches About the Man Who Raised God

Now: $12.95
Was: $16.95
He’s the Patron of the Universal Church, guardian of the Word Made Flesh, supreme help of fathers and workers, and Terror of Demons. After Jesus and Mary, he’s our single greatest model...

Now: $14.95
Was: $16.95
Here is the long-awaited sequel to Rod Bennett's Four Witnesses: The Early Church in Her Own Words, a page-turning spiritual adventure following the lives and words of Clement of Rome, Ignatius...