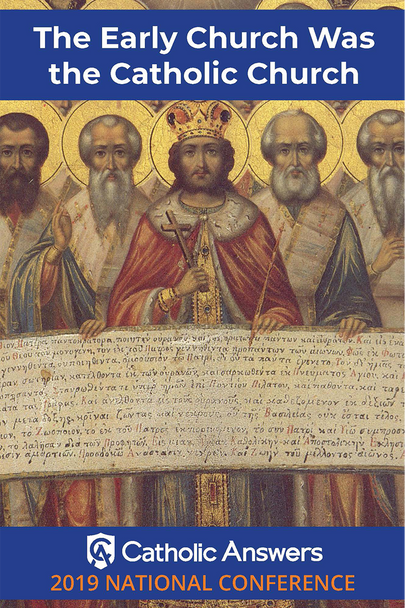 Some Protestant writers have claimed not only that major Catholic doctrines were unknown in the early Church but that the ultimate authority for the first Christians was Scripture alone.

But what does the evidence say?

Trent examines the historical record and shows how these claims fail to refute our Catholic faith.

The Shocking Truth About the Pope and the Church Fathers (MP3)

Now: $15.95
Was:
Discover what the Church Fathers say about the Papacy In his audio presentation The Shocking Truth About The Pope And The Church Fathers, Tim Staples shows that it's not only the Bible that...

Now: $4.95
Was:
Miracles are some of God's greatest gifts to the Church for evangelization, and yet Catholics seldom use them for that purpose. Tim will offer you a compendium of some of the most compelling...

The Church Fathers: Guides for a Church in Crisis (MP3)

Now: $4.95
Was:
We remember the Fathers of the Church for their holiness, their wisdom, and their courage to proclaim the truth in an age in which the Church was beset by heresy from within and by persecution from...

Now: $4.95
Was:
To deepen your knowledge of this exciting time in Christian history, join the Catholic Answers apologists for the Q & A Session at our 2019 conference, The Early Church Was the Catholic Church...

Now: $21.95
Was:
All Catholics who want to know and defend the Faith need to learn about the time of the apostles and the Fathers, for it is in these ages that the Trinitarian, Christological, and Marian doctrines...

Now: $4.95
Was:
When Catholic and Protestants discuss Scripture, the conversation can degenerate into “my interpretation” versus “your interpretation.” When such debates fail, it...

Now: $4.95
Was:
Using some of the earliest Christian writings as well as modern Church documents, Tim Staples shows the “organic connection between our spiritual life and the dogmas” (Catechism 89) and...

Now: $4.95
Was:
To deepen your knowledge of this exciting time in Christian history, join the Catholic Answers apologists for the Q & A Session at our 2019 conference, The Early Church Was the Catholic Church...

Now: $4.95
Was:
We’re familiar with the apostles and the authors of the New Testament, but how many of us know the apostolic Fathers? They were the Christian leaders who followed immediately the age of the...