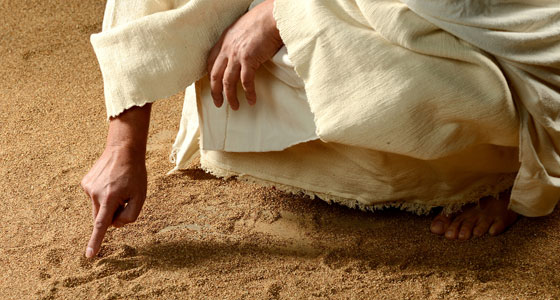 God did not reveal his plan of the ages all at once. As the centuries rolled on, he sent prophets to his people Israel, and they learned more about the shape of his plan. This is a concept that scholars refer to as progressive revelation, because the revelation happened in stages.

Jesus also taught his disciples progressively, during the years he spent with them. Very quickly, they realized he was the Messiah (John 1:41), but they did not initially understand that his kingdom was “not of this world” (John 18:36). Instead, they expected him to be what most people understood the Messiah to be—a political deliverer who would wage war against Israel’s oppressors, kick out the hated Romans, and restore political autonomy to the Jewish people.

They did not expect him to suffer, die on a cross, or rise from the dead. When he told them he would, St. Peter rebuked him and the disciples debated what he meant (Matt. 16:22, Mark 9:10). Even after his resurrection, they still asked him, “Lord, will you at this time restore the kingdom to Israel?” (Acts 1:6).

His reply was, “It is not for you to know times or seasons which the Father has fixed by his own authority” (Acts 1:7), and he told them to wait to receive power from the Holy Spirit, after which they would be his witnesses throughout the world. They thus learned that there would be an extended period before the next step in God’s plan.

But they didn’t know how long this period would last, and—understanding that they were now living in the final age of history—they tended to assume it would not be very long. Many in the early Church expected that Jesus would return in their lifetimes.

We see this in St. Paul’s writings when he describes how living and deceased Christians will experience the Second Coming:

We who are alive, who are left until the coming of the Lord, shall not precede those who have fallen asleep. For the Lord himself will descend from heaven with a cry of command, with the archangel’s call, and with the sound of the trumpet of God. And the dead in Christ will rise first; then we who are alive, who are left, shall be caught up together with them in the clouds to meet the Lord in the air (1 Thess. 4:15-17).

Notice that Paul refers to “we who are alive.” He envisions himself—and at least some of his readers—as among those who are still alive at the time of the Second Coming, which was a common expectation.

But God’s revelation is progressive, and he eventually made it clear that Paul would not live to see the Second Coming. Paul wrote 1 Thessalonians around A.D. 50, early in his literary career, but around A.D. 66 he penned his last letter, and we find him saying:

I am already on the point of being sacrificed; the time of my departure has come. I have fought the good fight, I have finished the race, I have kept the faith. Henceforth there is laid up for me the crown of righteousness, which the Lord, the righteous judge, will award to me on that Day (2 Tim. 4:6-8).

Similarly, in Peter’s last letter we find him cautioning readers against trying to calculate time from God’s perspective (2 Pet. 3:8). He also knew his own death was approaching, for he wrote, “I know that the putting off of my body will be soon, as our Lord Jesus Christ showed me. And I will see to it that after my departure you may be able at any time to recall these things” (2 Pet. 1:14-15). He thus received a revelation that he would not live to see Jesus’s return.

The disciple who may have received the most insight into how long the Christian age would last was John. When he initially wrote that it was the “last hour,” he knew this was hyperbole (exaggeration to make a point), because he didn’t literally expect the world to end an hour after he wrote those words. (Given the way ancient mail worked, it would have taken days or weeks for his letter to reach its destination!) Instead he meant it was the last hour in terms of God’s plan of the ages, although he may also have supposed that it would not be long in human terms before the world ended.

Yet God made it clear to him that the Christian age would go on for an extended period of time. In Revelation 20:1-6, John saw that it would continue for a lengthy era—symbolized as a period of a thousand years—before the final end came.

We thus find passages in the New Testament that reflect the early Christians’ initial guess that Jesus would return in their own lifetimes, but we also find passages where—by progressive revelation—God makes it clear to them that this would not be the case. From 20 Answers: The End Times