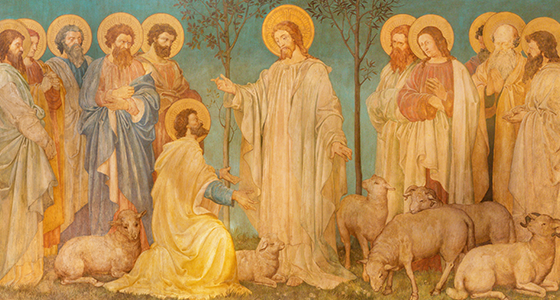 After he was raised from the dead, Jesus made time for a heart-to-heart talk with Peter, who had denied Jesus three times on the night Jesus was arrested.

Some of the disciples were out fishing on the Sea of Galilee. By a miracle, the risen Jesus filled their nets with fish, and:

When they got out on land, they saw a charcoal fire there, with fish lying on it, and bread. Jesus said to them, “Bring some of the fish that you have just caught.” So Simon Peter went aboard and hauled the net ashore, full of large fish, a hundred and fifty-three of them; and although there were so many, the net was not torn. Jesus said to them, “Come and have breakfast.” Now none of the disciples dared ask him, “Who are you?” They knew it was the Lord. Jesus came and took the bread and gave it to them, and so with the fish. This was now the third time that Jesus was revealed to the disciples after he was raised from the dead.

On one level, this is a straightforward story about a rough patch in the relationship between Peter and Jesus. On this level, it is a tale of failure and reconciliation. Peter has blown it by denying Jesus three times, which almost certainly has left in Peter’s heart a residue of anxiety that resurfaces as he faces the risen Jesus. And by asking Peter to confess his love not one or two or four but three times, Jesus is clearly acknowledging the rupture in their relationship, and trying to move Peter past it.

This we might call the lowest level of meaning. It is specific to Peter and Jesus. It is between the two of them. Peter’s personal shame needs to be addressed, and Jesus does so with kindness by asking Peter to do privately what he had failed to do publicly.

Related to this personal level of meaning, but on a higher and more public level, this story is about Peter’s role in the Church.

Peter is to lead the Church that Jesus is founding. And this story clearly contains profound teaching about the kind of leadership Jesus is asking for. The Church does not need a leader who is his own man, so to speak, but one who is a man for Jesus.

Jesus makes clear that leadership of the Church must flow from a personal love for Jesus: “Do you love me… feed my sheep.” Both of these levels of meaning are specific to Peter—one involves Peter the man who has sinned, and the other involves Peter in his role as the leader of the Church.

But between the private relief of Peter’s personal shame and the public bestowal of Church leadership, there is a level to this story that is really meant as a message for every Christian.

On this middle level, the story of Peter’s conversation with Jesus is a story about the very meaning of each Christian life.

At its root and at its height, Christian life is friendship with Jesus—a friendship so close that it is called communion. This story is about the kind of communion Jesus is offering.

God does not remain remote; he does not invite Peter into a pseudo-communion that is purely transcendent, as if God were a dazzling light that Peter could simply choose to approach or retreat from.

In Jesus, the transcendent God has come down.

This is the reason Jesus has been born, why God has taken on the life of a man: so that Peter (and anyone who meets Jesus) can enter into an intimate, two-way friendship with God.

Did you enjoy this excerpt from A Teacher of Strange Things? Order your copy today!