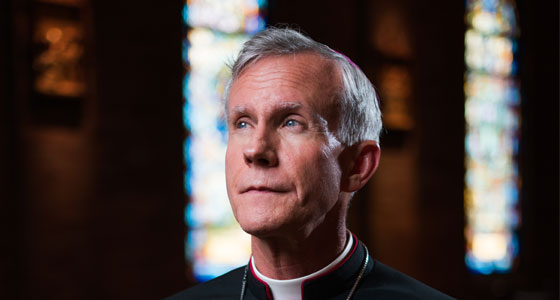 People lament that there is no longer a Christendom, but, you know, Christendom wasn’t exactly heaven on Earth.

The Church doesn’t have worldly power any longer, and I don’t think that’s a bad thing.

So it has to be nuanced, this idea that we’re living in a post-Christian world that’s so much worse than it was in the past. In some ways, we’re more similar to Christians living in the Roman Empire of the first century than to those in other eras throughout the centuries. It’s almost like we’re starting over, in the face of intense opposition, with the original mission of the Church: to bring the message of Jesus Christ to every corner of the Earth.

This means that the Church, her guiding light, her leadership through the hierarchy, is more needed than it has been in many centuries. The world is not just post-Christian; it’s post-God. There’s an angry resistance to truth and authority. If there is no God, then there is no authority, and no one can tell me what to do. That’s how we operate now. Moral anarchy. There’s a whole tone in the press, in government, in universities—even Catholic ones—saying we need to throw off this mantle of oppression.

In their atheistic or post-theistic worldview, people view as oppression any impingement on what they falsely believe to be their freedom. Religion, God’s agency, is viewed not as liberating and enlightening but as oppressive and controlling. And the Catholic Church is still seen as the big gorilla of religion, so she gets to be the biggest target of people’s rage against God and against authority.

The idea that human beings are made [or created] male or female is oppressive because it doesn’t let people make humanity whatever they want it to be. Marriage as a natural institution ordered to one man and one woman for life oppresses people’s wish to form sexual partnerships with whatever person or persons they choose—or end them at will.

It’s oppressive not to let people kill babies in the womb because we all should be allowed to define human life for ourselves.

None of this is real freedom. That’s hogwash. It’s an ugly and sinister conception of freedom that is ultimately slavery to the self.

Thus, anti-theism’s ultimate end seems to be anti-humanism, a sense that human nature and human beings are the problem in the world.

We see this in the rhetoric of some environmental activists and even some of the unfortunate preparatory materials for the Amazon synod, suggesting that humanity is like a virus on the planet, that this could be a wonderful and pristine planet if it weren’t for people.

What occurs to me is that in the Easter vigil, the Genesis reading talks about how, at the beginning, there was a formless wasteland. Then God in his creative activity, which flows from his love, began to give form to that formless wasteland. So there is no perfect natural world without God. We take him out of the equation, and there’s just a wasteland. And when God’s gone, human beings are just little individual formless wastelands with no image, all on our own in a meaningless moral void. It’s such a bankrupt, ugly view of life that it really surprises me how far people can take it.

Sadly, even within the Church some have lost a lot of commonsense humanism: that robust sense that we’re made by God with a nature (male and female, created in God’s image) that is good, though wounded, and ordered toward certain ends.

But I don’t see how people can be on that track and continue to live, continue to have any sort of perspective on life that gives meaning to getting up in the morning. If you’re on that track, it’s hard to find meaning, much less hope, in your life. And that’s tragic, because there is meaning and hope in the world. Christ isn’t dead. He rose from the dead, he is alive, and he offers us his life. He’s the light of the world, and he wants us to bear that light.

If we reject God, we will never truly understand ourselves. This is embedded in divine revelation: God has revealed to us that we are created in his image and likeness. If we leave him out of the picture, then we have nothing to measure ourselves against. Full, authentic humanism means recognizing that we have both natural and supernatural life—something our supposedly enlightened world ignores. Rekindling that humanism, renewing in the world that full view of mankind and our heavenly destiny, is the laity’s great challenge in our age.

If you want to find out more, pre-order your copy of Light and Leaven today!