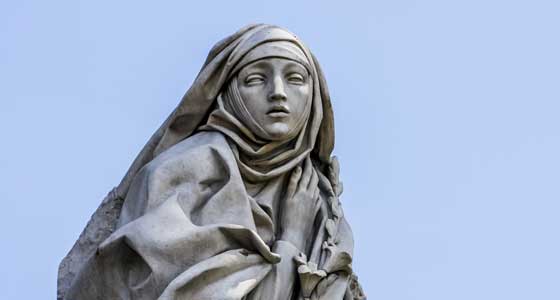 Born on the Feast of the Annunciation in 1347, Catherine was the twenty-third child of the wool dyer Jacopo Benincasa and his wife Lapa. From a young age, Catherine was devoted to Christ and the Church. She wished to join a group of third-order Dominican women known informally as the Mantellate or “Cloaked Sisters” and formally as the Sisters of Penance of St. Dominic. The group of laywomen wore a white woolen dress with a white veil and black cape and lived in their own homes.

Her family desired marriage for Catherine, however, and they persecuted Catherine in an effort to convince her to acquiesce to their plan. Her personal room was taken away and she was given a multitude of chores around the house to keep her so busy that she would have no time for prayer. Distraught at the behavior and unsure how to convince her family otherwise, on the advice of a Dominican friar Catherine cut off her hair to dissuade potential suitors. Finally, she informed her family of the visions of Christ she experienced as a youth and her pledge of virginity out of love for him. This admission finally convinced her father that her desire to join the Mantellate was authentic and so the family acquiesced. Catherine joined the group in 1366 at the age of nineteen.

Catherine experienced a rich spiritual life from an early age, with locutions from Christ and visions of the Savior—the first when she was six—the Blessed Virgin Mary, St. Dominic, Sts. Mary Magdalen, John the Evangelist, Peter and Paul, and even King David. When she was still a little girl, a vision of the Blessed Mother prompted Catherine to request her assistance in remaining a virgin for life so that she could be espoused to Jesus. Her prayers were answered and when she was twenty-one, Jesus appeared to her and presented an invisible engagement ring as a sign of their spiritual union. Catherine could see the ring and it remained visible to her for the rest of her life, but it was invisible to others.

Catherine’s spiritual life included also great spiritual gifts and miraculous events. She had great concern for the sick and suffering in Siena, especially those afflicted with diseases that repelled others. Catherine cared for a woman afflicted with leprosy, which she contracted in her hands as a result. When the women died, Catherine buried her, and the leprosy miraculously left, and she was healed. Catherine desired the salvation of all souls and interceded with the Lord on the behalf of others; for this, the Lord gifted Catherine with the ability to know the state of another’s soul. This special spiritual illumination allowed Catherine to sense the “beauty or ugliness” of the souls in her presence but also those she could not see. Souls in a state of mortal sin reeked in Catherine’s presence. In the presence of Pope Gregory XI, Catherine would inform the pontiff that his court, “which should have been a paradise of heavenly virtues” was instead full of “the stench of all the vices of hell.” When in Avignon on a mission to convince the pope to return his residence to Rome, Catherine met a young beautiful woman, who was the niece of a cardinal. The woman could not look Catherine in the eye and when Bl. Raymond of Capua, Catherine’s confessor, asked Catherine about the woman later, that told him the young woman, beautiful on the outside, reeked of decay. The woman was an adulteress and a priest’s mistress.

In 1376, Catherine received a spiritual gift from the Lord reserved to only a few holy saints: the stigmata or the wounds of Christ’s crucifixion. But Catherine begged the Lord not to allow the wounds to be visible on her body, for fear they would attract others out of curiosity and detract from proper attention to Christ. He agreed, and so Catherine suffered silently with the wounds for the rest of her life; they became visible on her body only at death. In one of her many ecstasies, in which she was oblivious and impervious to the outside world, Catherine received a supernatural garment from Christ, which provided the ability to wear the same amount of clothing in winter or summer with no physical discomfort. Catherine wore a single tunic over a petticoat in all seasons thanks to this exceptional gift.

Catherine lived during the time of the Avignon Papacy, when the papal residence and court was in southern France, causing great scandal throughout Christendom. St. Bridget of Sweden (1302-1373) had worked tirelessly to end the scandal and bring the popes back to Rome, sending letters to the popes in Avignon urging their return.

When St. Bridget died, the holy cause passed to Catherine, who wrote to the pope in one letter: “Come, come and resist no more the will of God that calls you: and the hungry sheep await your coming to hold and possess the place of your predecessor and champion, Apostle Peter. For you, as the vicar of Christ, should rest in your own place.” However, Catherine realized that letters were not sufficient to effect such a change, so she decided that a personal visit to France was necessary to bring Christ’s vicar home.

Prayer, virtuous living, trust and hope in divine providence, and respectful obedience to the hierarchy, as found in the life of St. Catherine of Siena, are the foundation of authentic Catholic response to crises in the Church. That foundation will effect genuine change and yield enduring reform in Christ’s Mystical Body.

Did you enjoy this excerpt from Steve Weidenkopf's new book?

You can now order your copy of Light From Darkness: Nine Times the Church was in Turmoil, and Came Out Stronger Than Before, the newest release from Catholic Answers Press.