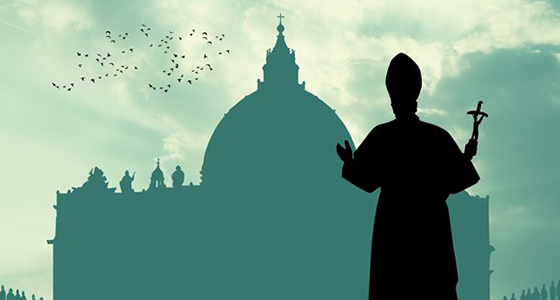 In the Gospels, Jesus appears to make contradictory statements regarding the kingdom of God. The Lord indicates that the “kingdom of God is at hand” (Mark 1:15) but also says “my kingdom is not of this world” (John 18:36). Theologians struggled with reconciling these statements in relation to the Church and developed the understanding that the Church is the “already and the not yet.” The Church is already the kingdom of God because some of its members, the saints, are in communion with God in heaven. But the Church is also not yet the kingdom because the visible element on earth is in constant need of renewal and will not fully be the kingdom until the coming of Christ again and the establishment of the new heaven and new earth. This theological construct is helpful in reviewing Church history by providing a framework to acknowledge the Church’s holy mission and actions but also the failing of its members and its constant need for renewal.


Since the Church on earth is composed of fallen yet redeemed creatures, the presence of crises should not surprise the student of history. Indeed, there has been hardly a time in the Church’s history without crisis. From the question concerning the lapsi in the early Church to clerical sexual immorality in multiple centuries, to the troubled papacy with rampant corruption, secular interference, anti-popes, to heresy, and to the influence of the modern post/anti-Christian world, the Church has witnessed—and survived—quite a number of trials and calamities.

And what of today? Some liken the present situation to the time of Roman persecution, where a pagan, anti-Christian society openly and violently oppressed the nascent Church. Although the modern world contains elements of that early Church period as, sadly, Christians are still killed for their faith throughout the world, the situations are actually quite dissimilar. The modern Church exists in a pagan post-Christian world with its insidious problems of secularization, moral relativism, and cultural crisis. The Romans saw the Church as a new fad that sought to disrupt its society and bring forth political chaos, and Christians were useful scapegoats for the emperors; but the Roman world did not persecute the Church primarily because it rejected its teachings and way of life.

There’s another critical difference. Today, there are large numbers of Catholics who are baptized non-believers more influenced by secular humanism and anti-Christian sentiment than by the teachings of the Church. Robert Cardinal Sarah described these individuals as having “nothing Christian about them but the name. They still practice their religion but without conviction, as a purely cultural or social act.” There are many factors to explain this situation, but one cause is the disintegration of Christendom and the establishment of pluralism. Christopher Dawson noted the deleterious effects of pluralism on the Church and its members:

[A] pluralist type of society involves serious disadvantages. It tends to make religion a matter of secondary importance. It means man’s first duty is not religious but political. We do not ask whether a man is a good Christian or a good Catholic, but whether he is a good citizen or a good American. There is even a danger that it [religion] may be treated as a private hobby, so that a man’s church membership will mean no more than his membership of a golf club.

The embrace of pluralism and secularization leads to moral relativism where morality is viewed as a malleable human construct and not an objective truth given by the benevolent Creator—to which humanity must assent or face eternal consequences. The modern world has further rejected the Christian-built civilization rooted in the pursuit of authentic human freedom by following the commands of the Savior and the Church he founded. Instead, in its profound cultural and historical amnesia, modernity seeks to create a post-Christian utopia marked by license, tolerance, and pursuit of temporal pleasure. Yet perhaps more challenging are the internal issues the Church faces, such as the crisis of clerical homosexual abuse, which was developed and prolonged, in part, due to organizational structures within the Church that allowed sexual predators and abusers access to victims and freedom from secular prosecution.

Some believe the modern crisis within the Church is the result of an infiltration of Freemasons, Modernists, liberals, or some other fifth-column group dedicated to destroying the Church from within. But the illness affecting the Church in the modern world runs deeper and is more perilous than the threat of nefarious groups lurking in the shadows. It is a “spiritual crisis, a crisis of faith… the mystery of iniquity, the mystery of betrayal, the mystery of Judas.” The betrayer of Jesus focused on worldly activities and the pursuit of prestige and adulation and criticized the expenditure of money on what he deemed valueless. Influenced by the Prince of Lies, he lied to himself, to his brothers, and to the Lord. He no longer believed but pretended to do so and sold the Savior for silver.

Despite disheartening crises, let us learn our lessons from Church history and not lose hope. Let us keep our eyes on Christ and on individual and communal actions that lead to eternal salvation. No, we should not ignore the need for temporal efforts or hide ourselves in bunkers. The laity, especially, should embrace past historical expressions of lay involvement in the Church. During the Catholic Reformation it was not uncommon for devout laity to support the Church’s missionary activity, to encourage bishops to remain steadfast in reform, and to hold the clergy accountable for their actions. A great example is Marie de Vignerot (1604-1675), the niece of Cardinal Richelieu (1585-1642), who financed evangelization efforts and supported the growing Church in Africa and Southeast Asia and worked closely with royal and ecclesial authorities in a respectful yet demanding manner.

Yet we should also resist the temptation to focus excessively on temporal priorities, to remain hostage to the tyranny of the present, to “pretend to save the Church by our restructuring efforts, which only add all-too-human excess weight to her divine essence.” Keeping a properly balanced perspective will not only aid reform—it will guard us against undue anxiety and stress and the loss of faith that might result. Calamities affecting the Church from within or without, the actions of immoral and wicked clergy; they should not result in a loss of faith or hope or abandonment of the Church, but rather should prompt us to greater focus on prayer and hope. In prayer above all, in our “innermost respiration,” we learn to persevere in the midst of great crises.

Catholics of the past who persevered in crisis through prayer and hope did not always live to see the fruits of the reform they aided, but they always remained rooted in Christ and his Church. Let us imitate their example. Let us not sow fear, division, and discord, or become enamored of our own personal theories or solutions. Instead, let us trust in Christ, work toward our own and our neighbor’s salvation, and remember that “we possess the hope that ensues from a real encounter” (Spe Salvi 32) with the God of faith, hope, and love.

St. Catherine of Siena and Mary, Star of Hope, pray for us.

You can now order your copy of Light From Darkness: Nine Times the Church was in Turmoil, and Came Out Stronger Than Before, the newest release from Catholic Answers Press.