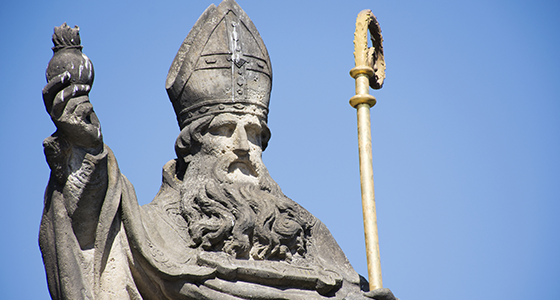 Augustine’s magnum opus not only answered the immediate objections of his contemporaries; it provided (and provides) a foundation of authentic Christian historical perspective. As a young man, Augustine had known well the pagan mentality, as he rejected the Faith and embraced the cults of false gods. Eventually, through the patient prayers of his saintly mother Monica, Augustine converted and found peace. The pagan scapegoating of the Church disturbed Augustine, so he dedicated thirteen years to writing a response and developing a Catholic understanding of history. Subtitled Against the Pagans, the City of God is a Catholic manifesto on interpreting history and maintaining a proper perspective of human events.

The work comprises two parts containing twenty-two books. Part one (books I-X) articulates a defense of the Faith in response to the pagan charge that the Church was the reason for the empire’s decay. Part two (XI-XXII), which forms the majority of the work, illustrates Augustine’s historical perspective, wherein history is viewed as a great drama between two cities: the City of Man and the City of God. The City of Man, founded on self-love, is where pride, ambition, greed, and expediency reign supreme. In contrast, the City of God is founded on selflessness and love of God, and in it humility, sacrifice, and obedience are paramount.

Membership in the City of God is not exclusionary. As Augustine wrote: “So long, then, as the heavenly City is wayfaring on earth, she invites citizens from all nations and all tongues, and unites them into a single pilgrim band.” The cities are distinct yet comingled in time. Each individual struggles with membership in both cities. At times, the citizen finds himself immersed in the City of Man and at other times he is safely ensconced in the City of God, but, more often than not, he bestrides the two. Augustine’s construct is meant to illustrate that the “meaning of history lies not in the flux of outward events, but in the hidden drama of sin and redemption.” For Augustine, the sack of Rome, as devastating as it was, did not constitute the end of the world, as some feared, nor a repudiation of the Faith, as the pagans claimed. Rather, the event can be understood through the prism of an authentic historical perspective as the free-willed action of inhabitants of the City of Man, focused on selfish goals.

Embracing Augustine’s perspective gives us the ability to maintain calm and hope in the midst of earthly calamities. Sadly, that perspective is sorely lacking in the modern age.

Modernity has lost a proper sense of historical perspective and lacks historical memory. Perhaps this mindset is widespread because modern man is too entrenched in the City of Man and has rejected, or at least ignores, the City of God. The Catholic author, historian, and politician Hilaire Belloc (1870-1953) opined on this modern mindset in his 1929 work Survivals and New Arrivals. In it he analyzed the strength and vitality of the Church in the modern world by focusing on the various forms of attacks against it and how likely the Church was to survive these assaults. He categorized these attacks into survivals and new arrivals. Survivals were centuries-old attacks that were not sustainable into the future. The main opposition came from the new arrivals: attacks present in Belloc’s day, such as nefarious political ideologies that seek to replace the Church with the state as the citizen’s object of love and obedience. Within this group Belloc included also the modern mind, which he qualified as not so much an attack as a resistance—something that tries to render faith unintelligible. With its three main vices of pride, ignorance, and intellectual sloth, the modern mind impedes a vibrant faith life.

It also views history with disdain, believing that modernity is superior to the past. As a result, the present becomes the sole focus of human activity and thought. Reflection on the past in order to learn from history is rejected. The future is ignored because it cannot produce immediate and tangible results. God is ignored, partly because the principal benefit of a relationship with him is in the future (eternal life), and instead, modern man worships himself. Belloc argued that changing the modern mind proves extremely difficult, because indoctrination in this false mindset is achieved through universal compulsory education, which is centered on the accumulation of information rather than on forming virtue.

Additionally, Belloc noted that the modern mind lacks the skill of critical thinking, in part, because it focuses on the pursuit of temporal pleasures in the present and because the popular press enables this “sloth by providing sensational substitutes.”

Did you enjoy this excerpt from Steve Weidenkopf's upcoming book Light From Darkness: Nine Times the Church was in Turmoil, and Came Out Stronger Than Before? The newest release from Catholic Answers Press is due out late August and we're really excited about this book.

Sign Up Here and we'll notify you with a very special offer as soon as the book hits our warehouse!