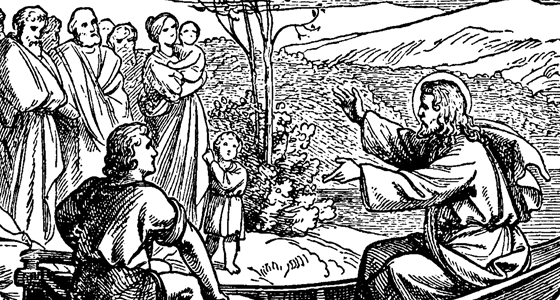 He who devotes himself to the study of the law of the Most High . . . will be concerned with prophecies . . . and penetrate the subtleties of parables; he will seek out the hidden meanings of proverbs and be at home with the obscurities of parables. -Sirach 39:1-3

Early in his exploration of the writings left by the Church Fathers, St. John Henry Newman discovered that the primitive Church approached evangelization and Christian initiation in a completely different way than we do.

Newman saw that the early Church had a settled practice of holding her profoundest doctrines in reserve, keeping them deliberately away from inquirers and catechumens, actually saving them as secrets, in fact, until much later in the process of formation.

St. Cyril, bishop of Jerusalem, writing instructions for one of his catechists, warned thusly: “Tell nothing to a stranger; for we deliver a mystery…You, yourself, were once a catechumen…and while you were, I did not tell you what was coming.”

Previous scholars had called it the Disciplina Arcana, the “discipline of the secret.” They guessed that it was enforced because of the Church’s underground position at the time—to guard against the danger of admitting a Trojan Horse into the community during periods of persecution. Newman, however, discerned some problems with that thesis. All of the quotes presented above, for instance, date from seventy-five to a hundred years after Christianity had been legalized by Constantine.

The early Church’s “rule of reticence,” therefore, remained in effect long after persecution had ceased. Newman also noticed that no early writer ever explained the regimen in terms of confidentiality. Whenever they did address themselves to the question of why such methods were employed, the Fathers instead emphasized the unfitness of uninitiated persons to profitably hear them.

Newman himself reached the conclusion that this ancient practice constituted nothing more or less than a pattern that those apostles learned from Jesus personally and then passed down to the Church.

In fact, he did not hesitate to conclude that these methods represent “an apostolical rule for dispensing the word of life; and as such, the ancient Fathers received them.” Armed with this conclusion, we can find ourselves looking at the teaching phase of Christ’s work with his disciples in a whole new light.

There’s no doubt that Newman’s assessment, if proved true, would go a long way toward clarifying one of the most traditionally puzzling aspects of the Gospel accounts: our Lord’s insistence on doing most of his public teaching by means of strange metaphors and obscure parables rather than simply doling out straightforward didactic answers about himself and his mission.

Did Jesus even want to be understood?

The answer to that question, surprisingly—and proved out by his own words—is yes and no. “Then the disciples came and said to him, ‘Why do you speak to them in parables?’ And he answered them, ‘To you it has been given to know the secrets of the kingdom of heaven, but to them it has not been given. For to him who has will more be given, and he will have abundance; but from him who has not, even what he has will be taken away’” (Matt. 13:12).

Did you enjoy this excerpt from Rod Bennett's These Twelve: The Gospel Through the Apostles Eyes?