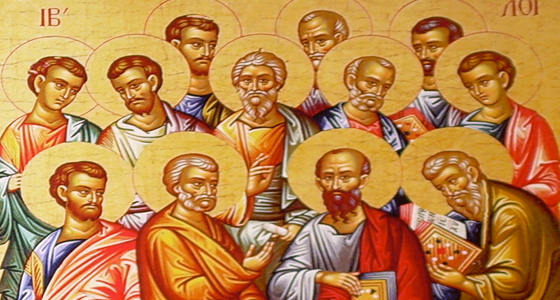 There can be no doubt that the apostles’ great work of evangelization took them to the ends of the earth. Of the eventual ends of the Twelve themselves, by which they glorified the God they served, there are many pious legends, several ancient histories that may include creditable material, and a few solid facts.

The first to be lost was James, the elder brother of John—who never made it out of the home base of Jerusalem. James had once asked the Lord for a place at his right hand in the kingdom to come; Jesus asked him, “Are you able to drink the cup that I drink, or be baptized with the baptism that I am baptized with?” (Mark 10:38)—and his apostle, undaunted, replied in the affirmative. Jesus took him at his word, and James gained immortal glory by following his Savior’s footsteps into the judgment hall of the Herods, where he received the same sentence of death (in his case, death by the sword—Acts 12:1-2).

Andrew planted the seeds of faith in Scythia, a region that corresponds today to Poland, Ukraine, and southern Russia, later reaching the modest town that became Constantine’s “New Rome” on the Bosporus and being consecrated the first bishop of that city.

Peter died at Old Rome on the Tiber; crucified upside down, according to Tertullian, in Nero’s circus. Before that, he helped found the church at Antioch, where believers were first called “Christians”; then he undertook numerous missionary journeys before taking on his most famous job in Rome.

The post-Acts movements of Philip are much more difficult to trace, owing to the hopeless confusion between himself and the Philip who is mentioned in Acts 21:8-9—another man entirely. Since this mix-up has been ongoing since the late second century, the many old tales of Philip’s missionary adventures are, in the words of the Catholic Encyclopedia, “purely legendary and a tissue of fables.”

The attractive story that depicts Thomas as the “apostle to India” is perhaps a bit less chancy, but only marginally so. The main problem is that the only real source for the story is an extravagant Gnostic document called The Acts of Thomas, which goes so far as to depict Thomas as Jesus’ twin brother! It is true, however, that solid archaeological discoveries have verified some of the names cited in the book along with a few other historical details; so it is possible that a kernel of truth might be preserved underneath it all.

The name of Matthew/Levi is certainly very prominent, though: author, as he was, of the Gospel from which we have gleaned so much of the story found in these pages. There is, at least, a solid tradition that he died a martyr—but whether he died on the block, at the stake, or stoned to death by the Jews, is impossible to determine.

Our other “political” apostle, Simon Zealotes, hasn’t fared much better in the biographical department; he may have reached Britannia in his travels, or Roman Egypt—he may even have been one of the earliest bishops of Jerusalem. The stories, again, are muddled and contradictory.

The fate of Jude Thaddeus is no more clear; he may have ministered in Samaria, Mesopotamia, and Libya. The admirable story of his death by means of an axe while on a preaching tour of Edessa is, alas, marred by another case of mistaken identity; he has, more than likely, been confused in that account with another disciple, Thaddeus of Edessa, one of the seventy.

It was James the Just who held down the Jerusalem phase of Jesus’ final command: “Jerusalem, Judea, Samaria, and the ends of the earth.” Both Scripture and history identify him as the man who spent his entire career as first bishop of the first local church in Christendom. The circumstances of his death are related Eusebius in his Church History and also by the Jewish historian Josephus: “Albinus assembled the Sanhedrin of judges, and brought before them the brother of Jesus, who was called Christ, whose name was James, and some of his companions . . . and when he had formed an accusation against them as breakers of the law, he delivered them to be stoned.”

Matthias, the “bench player” from among the seventy who stepped in when Judas faltered and failed, seems to have begun in Judea as well, but moved on to the region the Greeks called Colchis (at the intersection of eastern Europe and western Asia). An early legend says that he preached the gospel to “barbarians and cannibals” there, gave up his life, and was buried at Sebastopol.

John bar Zebedee, brother of the greater James, traditionally held to be the beloved disciple who was faithful at the foot of the cross and to whose care Jesus commended the bereft Mater Dolorosa, Mary, lived to be nearly 100 years old. With Mary, he moved to Ephesus, where he planted churches and ministered to the whole region of Asia Minor for many decades. While there, he wrote the Gospel of John along with the three New Testament epistles that bear his name, and may have written the book of Revelation (after a strenuous sojourn at the Roman penal colony of Patmos). Among the Twelve, he was the last man standing.

We have not yet reached Nathanael bar Tolmai, with whom we began this journey. When Pantaenus, the great second-century theologian and apologist and mentor of Origen, really did reach India, he was told that Nathanael had been there first, some fifty to sixty years earlier. He had brought with him, the apologist heard with amazement, a copy of Matthew’s Gospel written in Hebrew,74 which was still treasured by the small body of Christians he encountered there. After founding that church, it was said, Nathanael traveled on to Armenia, a land of particular savagery in those days. He converted the king there, a man named Polymius, angering the king’s brother—who vowed to take revenge. Nathanael was captured and taken to a place of torture, where, on a rack, he was skinned alive with flaying knives.

Acting as permanent, official witnesses to the Gospel for the Church they helped found, these Twelve saved the world, and were the indispensable building blocks of the one apostolic Church and indeed the very foundations of heaven.

Did you enjoy this excerpt? Order your copy of These Twelve: The Gospel Through the Apostles' Eyes today