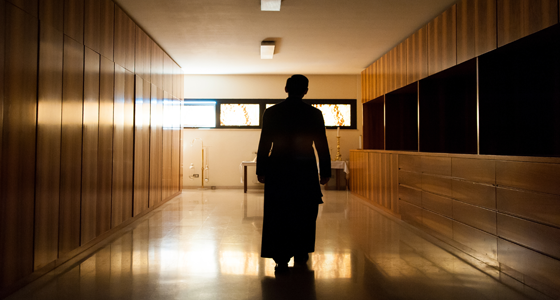 I think that a lot of what’s wrong in the world is that the Church is so weakened and so corrupted that she’s not that beacon on the hill, not leaven for the world, any longer. She can be leaven, and she hasn’t lost the light, but the corruption is deep. Yet I do not blame the Second Vatican Council for that. I blame the human corruption that was already there prior to the council. As a kid who grew up in the sixties and seventies, I remember so much of that in the larger culture: the turmoil, the lack of respect for authority. It seemed like the whole world cried, “Who has the right to tell me anything?"

Well, the Church has not just the right but the responsibility to share the truth that Jesus Christ offered with his own body and blood; but when the Church falters, the world shakes. And that’s what we’ve seen and are seeing. The fabric of human civilization is dependent on the Church’s playing her role, the most significant role, more significant than any nation or any other power on Earth. Because it’s not our power; it’s the power of the Son of God over everything in heaven and on Earth.

And if we really believe that, then the Church has to deal with this corruption not just for her own sake but for everyone’s sake; so human beings can flourish in this world and have everlasting life in the next. I said something like that at the USCCB that probably got some smirks. But the very last canon of the Code of Canon Law says all of this is ultimately about the salvation of souls, and that’s the mission of the Church. That is the everlasting life we’re called to, but when the Church is as corrupt and beleaguered as she is today, then the world’s in trouble.

I was among the very last of the U.S. bishops chosen by Pope Benedict, only a few months before he resigned.

Pope Benedict’s resignation was one of those moments like 9/11, like Kennedy’s assassination. I remember exactly where I was standing, who told me. I was getting ready for a Mass here at the Chapel of Sts. Peter & Paul, just a regular morning Mass. I remember standing there and this deacon I’d worked with for years tells me that Pope Benedict is resigning. I thought, What? Popes don’t resign. This has to be fake news. But, of course, it wasn’t.

I remember watching on television as the helicopter flew from St. Peter’s and took Pope Benedict. For those first few days, he went off to Castel Gandolfo, and then . . . okay, where does a resigned pope go? At that moment, the ground began to shake under me as a bishop. It’s been shaky ground ever since.

A lot of ink has been spilled trying to figure out what really was motivating Pope Benedict. I don’t claim to have the answer, but based on what he has said, I guess he didn’t think he had the strength to reform the corruption in the Church. And now Pope Francis is dealing with a corrupt monster that I don’t think any individual could really tackle, honestly. But he has brought some strength, and by the grace of God, all things are possible.

Certainly, it’s only the grace of God, the power of the Holy Spirit, that will cleanse this corruption in the Church and in the world.

Our January ad limina visit was a very pleasant gathering, but somewhat disheartening to me because it was almost too pleasant.

Things weren’t pleasant, from what I could see, in the life of the Church. There was too much confusion, too many people wondering about disruptive and confusing things like the Amazon synod, too many Catholics not clearly and joyfully proclaiming the truth of Jesus Christ as the apostles did back in the first century.

I asked about the McCarrick report, and we got something of an answer, but we still haven’t seen it.

But of course, there’s lots of information out there about some really scandalous things that have gone on, whether financial or sexual impropriety or whatever it is. The corruption always seems to go back to the same areas: sex, money, or power. And a lot of times, it’s all three woven together, as with the sad legacy of McCarrick. His ability to raise money brought him power, and power let him abuse people sexually and get away with it. He was too much of the world. You can’t be a McCarrick and really believe in the Church’s call to the priestly ministry, so whether it’s insanity or evil I use his name to signify the kind of corruption he exemplifies.

Then there are many less dramatic cases of priests who just struggle to live up to their priestly commitments as fully as they should; priest with substance abuse issues, or emotional issues, or relationship issues that aren’t sexual but are still inappropriate for a priest who should be chaste in all he does.

Yet we must also be sober about the times that we live in; we have to recognize the reality of evil. As Pope Paul VI said, the smoke of Satan had entered the Church. I think that we’re seeing that smoke become at times a roaring fire. Evil is real, and evil is powerful, but the Son of God died and rose and conquered the power of evil.

And so we have to be joyful and we have to have faith. As Christ said, “The gates of hell will not prevail.” Now, we tend to think of this as a guarantee. “We’ve got God on our side, no matter what.” It’s true, but it can also lead to complacency. Christ and the Church will prevail, but the Church may get battered. She may lose souls. She may suffer greatly. The Church could soon look very different on the outside.

Christ didn’t give us any guarantees about that. Let us not take his promises and be complacent, as if there were no work for us to do, no battle for us to fight. We must continually defend the Church from outside attacks and reform the Church’s corruption from within.

If you want to find out more, pre-order your copy of Light and Leaven today!