Catholics Confronting Hitler: The Catholic Church and the Nazis 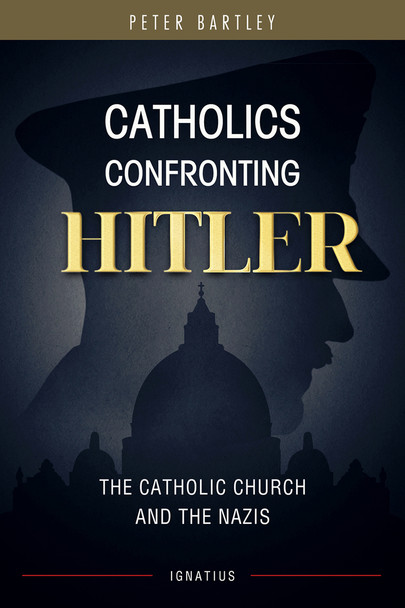 Catholics Confronting Hitler: The Catholic Church and the Nazis

Written with economy and in chronological order, Catholics Confronting Hitler offers a comprehensive account of the response to the Nazi tyranny by Pope Pius XII, his envoys, and various representatives of the Catholic Church in every country where Nazism existed before and during WWII.

Peter Bartley makes extensive use of primary sources – letters, diaries, memoirs, official government reports, German and British. He manifestly quotes the works of several prominent Nazis, of churchmen, diplomats, members of the Resistance, and ordinary Jews and gentiles who left eye-witness accounts of life under the Nazis, in addition to the wartime correspondence between Pius XII and President Roosevelt.

Catholics Confronting Hitler reveals how resistance to Hitler and rescue work engaged many churchmen and laypeople at all levels, and was often undertaken in collaboration with Protestants and Jews. The Church paid a high price in many countries for its resistance, with hundreds of churches closed down, bishops exiled or martyred, and many priests shot or sent to Nazi death camps.

Bartley also explores the supposed inaction of the German bishops over Hitler's oppression of the Jews, showing that the Reich Concordat did not deter the hierarchy and clergy from protesting the regime's iniquities or from rescuing its victims. While giving clear evidence for Papal condemnation of the Jewish persecution, he also explains why Pius XII could not completely set aside the language of diplomacy and be more openly vocal in his rebuke of the Nazis.

"A redeeming account of the great men, plus the lesser known individuals and groups, that opposed Hitler's madness. The Catholic opposition to Hitler is a subject that we cannot learn too much about." —Paul Kengor, Ph.D., Professor of Political Science, Grove City College

"Vicious allegations against Pope Pius XII and the Catholic Church in Germany get mindlessly repeated. The best way to answer them is with a calm and detailed account of the facts. Bartley's well-documented volume shows the tireless work of Catholics to oppose the Nazi regime, to defend those being attacked, and to preserve the liberty of the Church." —Joseph Koterski, S.J., Professor of Philosophy, Fordham University

"A magnificent addition to the small library of works which put the lie to the slanderous assertion that the Catholic Church was silent in the face of Nazi atrocities." —Gerard V. Bradley, Ph.D., Professor of Law, University of Notre Dame

Now: $10.00
Was: $20.95
Did the Catholic Church add extra books to the Bible? Or did Protestant leaders have them removed? Find out the truth! Some differences between Catholicism and Protestan

$14.95
Now: $10.00
Was: $16.95
Mere centuries after its beginning as an obscure Jewish sect, the Catholic Church stormed the ancient Western world, and from its Roman remnants and barbarian tribes a united Christendom was forged...

Church of Spies: The Pope’s Secret War Against Hitler (Paperback)

$29.95
Now: $26.95
Was: $29.95
Vatican silence on Nazi crimes is fiercely debated. History has accused wartime pontiff Pius the Twelfth of complicity in the Holocaust and dubbed him "Hitler's Pope." But a key part of the story has...

Apostles and Their Times

$14.95
Now: $13.45
Was: $14.95
Here's an unflinching look at the lives and sacrifices of those first Christians who were given the task of spreading the Gospel to the ends of the earth. Relying on ancient documents — as...

$16.95
Now: $10.00
Was: $18.95
One of the ways Jesus answered his critics was to use their own words against them—to show how even the enemies of the Faith admitted crucial facts that undermined their own position...

$18.95
Now: $16.95
Was: $18.95
Discover the Bible-believing, Jesus-centered, morally pure Christianity of the Middle Ages Superstitious peasants and relic-hawking clergy if this says Medieval Christianity to you, then think again...

$19.95
Now: $17.95
Was: $19.95
Tired of being stumped when false claims are made about the Catholic Church? Want to be armed with knowledge that puts these mistruths to rest? In these pages, veteran apologist Gerard Verschuuren...