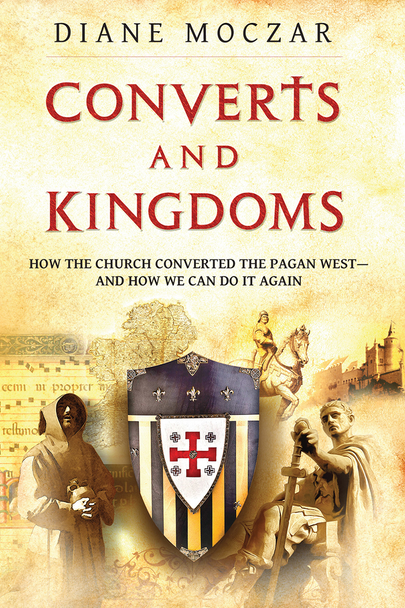 With book, Converts And Kingdoms, historian Diane Moczar has written a marvelous book about great converts who changed not just the Church but also the destiny of human civilization.

In her accessible and easy-to-read style she makes history come alive.

Mere centuries after its beginning as an obscure Jewish sect, the Catholic Church stormed the ancient Western world, and from its Roman remnants and barbarian tribes a united Christendom was forged. How do we explain this remarkable success? And what can we learn from it?

In Converts and Kingdoms, Professor Moczar tells the story of early Christianity’s faith, courage, and cunning—chronicling the labors of missionaries and martyrs (with no small help from Providence) to spread the gospel and lay the foundation for the most magnificent culture human history has ever known.

With her stirring narrative style, Dr. Moczar reveals a young Church ardently occupied with the great work of conversion: with saints and generals, priests and kings alike filled with zeal to make disciples of all nations. From the Roman temples at the heart of the old world to the Aztec altars on the border posts of the new, you will encounter heroic tales of the nascent Faith, including:

Within these pages you will find not only the story of the Church’s early missionary efforts but also an analysis of why they succeeded: providing you valuable lessons for re-evangelizing a modern West that has slipped into a new and insidious form of paganism.

Read Converts and Kingdoms today to be inspired by the convert-makers of the past, and to learn from them how to win the world anew for Christ.

$15.95
Now: $13.95
Was: $15.95
A preacher's kid at a Catholic university, Kevin Lowry settled into a “double major in beer and billiards” soon followed by uncomfortable run-ins with pious students, failing grades,...

$14.95
Now: $12.95
Was: $14.95
Mere centuries after its beginning as an obscure Jewish sect, the Catholic Church stormed the ancient Western world, and from its Roman remnants and barbarian tribes a united Christendom was forged...

David And Solomon: Expanding The Kingdom

$19.95
Now: $17.95
Was: $19.95
Why is Jesus called the Son of David and why is that important to understanding Our Lord? How did the Kingdom of Israel prefigure and anticipate the Kingdom of God and the Catholic Church? Join...

Marching Orders: A Tactical Plan For Converting The World To Christ (Digital)

$9.99
Now: $7.99
Was: $9.99
Your mission: Proclaim the Good News Your weapons: Faith and reason—and the power of the Holy Spirit Your opposition: The world, the flesh, and the devil When Dan McGuire was an officer...

Elijah & Elisha: Conscience of the Kingdom

$24.95
Now: $21.95
Was: $24.95
Shunning comforts and risking their lives, the great prophets Elijah and Elisha stood fearlessly against pagan priests and kings who opposed the God of Israel. The Israelites fell into gross...

The Glory of the Crusades (Digital)

$9.99
Now: $7.99
Was: $9.99
How can the Crusades be called “glorious”? Our modern mindset says they were ugly wars of greed and religious intolerance—a big reason why Christians and Muslims today can’t...

$9.99
Now: $7.99
Was: $9.99
Islam...Is it a religion of peace?...Are muslims an easy ally in the fight against global secularization and the culture of death?...Are their beliefs really so different than our own? Some...

$14.95
Now: $12.95
Was: $14.95
Mere centuries after its beginning as an obscure Jewish sect, the Catholic Church stormed the ancient Western world, and from its Roman remnants and barbarian tribes a united Christendom was forged...

$9.99
Now: $7.99
Was: $9.99
What does the Church teach about that? Sometimes this seems like a question with more than one answer. The Catholic Church claims to possess the fullness of Christian truth, but getting to the truth...

$9.99
Now: $7.99
Was: $9.99
The theory goes like this: Just a few centuries after Christ’s death, around the time the Roman Empire converted to Christianity, the true Faith suffered a catastrophic falling-away. The simple...

All In The Name (Digital)

$9.99
Now: $7.99
Was: $9.99
Mark McNeil spent years in the Oneness Pentecostal movement: praying in its lively services, zealously spreading its unconventional teachings, and rejecting mainstream Christianity as misguided. He...

$4.99
Now: $3.99
Was: $4.99
Wouldn’t it be great to have a book to give non-Catholic or ex-Catholic friends and family to explain exactly why we believe what we believe? The good news is that now there is! Why...

$2.99
Now: $1.99
Was: $2.99
Deliverance from pornography is possible—and these true stories prove it. The pious Catholic man whose fairytale marriage was almost destroyed by his fierce addiction… The young...