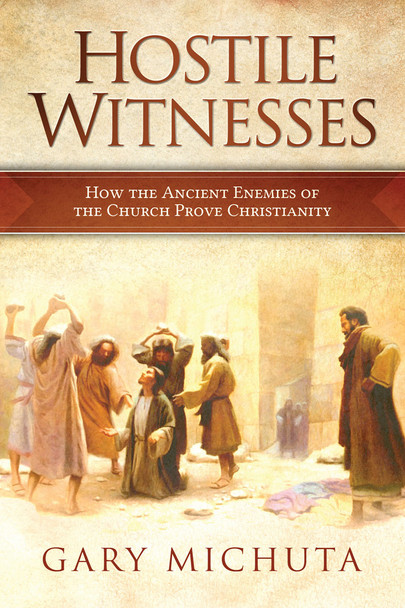 One of the ways Jesus answered his critics was to use their own words against them—to show how even the enemies of the Faith admitted crucial facts that undermined their own position.

That’s a strategy that defenders of the Faith have taken to heart and employed through the ages - In fact, no matter how hostile and distorted the attacks on Catholicism have been in the centuries that followed, it’s proved impossible for critics to mount their attacks without tripping themselves up - and inadvertently testifying to the truth of what they’re trying to destroy.

With his book, Hostile Witnesses: How the Historic Enemies of the Church Prove Christianity, renowned author Gary Michuta introduces you to a veritable rogues’ gallery of the historic opponents of the Church, beginning with those recorded in the New Testament. He flings open a treasure chest of little-known quotations from the enemies of the Faith and shows how they unwittingly testify to its truth.

Herod the Great…the scribes and Pharisees…Voltaire…Martin Luther…John Calvin – Hostile Witnesses provides you with the key quotations from these and many other figures, showing how they inadvertently provide compelling evidence for the truth of the Faith.

Now: $20.95
Was:
Protestants and Catholics alike share the faith that all scripture is inspired by God and is profitable for doctrine, for reproof, for correction, and training in righteousness (2Tim 3:16). But one...

How to Share Your Faith with Anyone: A Practical Manual of Catholic Evangelization

Now: $14.95
Was:
Recent popes have challenged all Catholics to participate in the New Evangelization. But most Catholics feel ill-equipped to take up the challenge. Terry Barber, founder of St. Joseph...

A Catholic Scientist Champions the Shroud of Turin

Now: $17.95
Was:
The Shroud of Turin is celebrated as one of the holiest and most important relics of Christianity, with millions of pilgrims traveling to see the precious cloth in Italy on the rare occasions it...

Now: $19.95
Was:
Did the Catholic Church add extra books to the Bible? Or did Protestant leaders have them removed? Find out the truth! Some differences between Catholicism and Protestantism can be tricky to...

Now: $21.95
Was:
October 2017 marked the 500th anniversary of the Protestant Reformation, when, as the story goes, Martin Luther nailed a list of his grievances with the Catholic Church (commonly called "The 95...

Now: $14.95
Was:
Mere centuries after its beginning as an obscure Jewish sect, the Catholic Church stormed the ancient Western world, and from its Roman remnants and barbarian tribes a united Christendom was forged...

Now: $1.00
Was: $15.95
Do you want to be a better Catholic? Reform Yourself! The sixteenth-century Catholic Church was definitely in need of reform. Too many of its leaders were worldly and corrupt; too many of the...