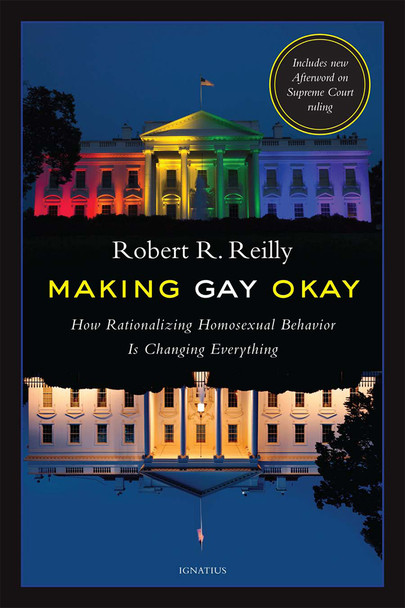 Doctor Joseph Nicolosi says of Making Gay Okay: How Rationalizing Homosexual Behavior Is Changing Everything  - "If you read only one book on homosexuality, natural law theory, and the radical changes now being instituted within our culture, let it be this one!”

The answers are in the dynamics of the rationalization of sexual misbehavior. The power of rationalization-the means by which one mentally transforms wrong into right-drives the gay rights movement, gives it its revolutionary character, and makes its advocates indefatigable. The homosexual cause moved naturally from a plea for tolerance to cultural conquest because the security of its rationalization requires universal acceptance. In other words, we all must say that the bad is good.

The outcome of this dispute will have consequences that reach far beyond the issue at hand. Already America's major institutions have been transformed-its courts, its schools, its military, its civic institutions, and even its diplomacy. The further institutionalization of homosexuality will mean the triumph of force over reason, thus undermining the very foundations of the American Republic.

$1.00
Now: $0.15
Was: $1.00
With the recent government mandate requiring insurance companies to pay for contraception, sterilization, and abortifacient drugs, a clarion warning has rung out for all persons of faith: Religious...

Now: $3.95
Was:
Our God is a God of mercy: ever ready to love, forgive, and embrace us as his sons and daughters. Yet some of the Bible’s teachings on sexual morality can seem harsh and discriminatory. How can...

Getting The Marriage Conversation Right: A Guide For Effective Dialogue

Now: $6.95
Was:
Getting the Marriage Conversation Right: A Guide for Effective Dialogue teaches you how to promote and defend traditional marriage in non-religious terms. It’s a great “how to”...

An Exorcist Explains the Demonic: The Antics of Satan and His Army of Fallen Angels

Now: $14.95
Was:
From Fr. Gabriel Amorth, the renowned exorcist in Rome, comes this powerful, eye-opening book on the deadly antics of Satan and his fallen angels, as well as spiritual remedies for each. An Exorcist...

Now: $4.95
Was:
Toward a Chaste Ordering of Desires What does the Church actually teach about same-sex attraction? If God created certain people gay, how can we say that it’s sinful for them to live that...