Male and Female He Made Them (Digital) 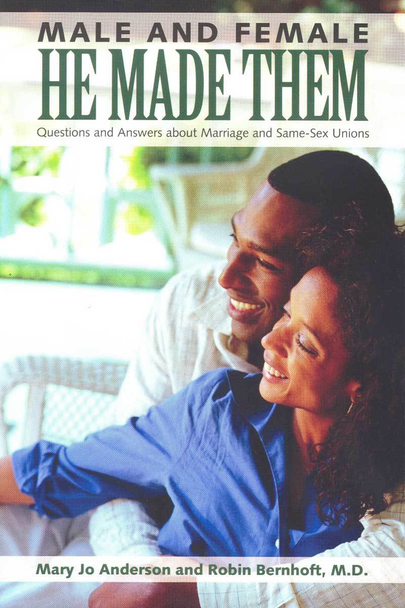 Male and Female He Made Them (Digital)

Our society today is undergoing tremendous assaults on marriage and the family.

Sadly, many people do not realize the extent to which their enemies are succeeding. If this attack continues unchecked, the consequences will be disastrous. The battle currently being waged focuses particularly on marriage and is culminating in the fight for homosexual "marriage."

Proponents have persuaded much of the public that such unions are a matter of "justice", a matter of "rights".

In Male and Female He Made Them the authors lead the reader through the homosexual marriage debate in these key areas:

Their goal is to help citizens recover a known but marginalized truth: Marriage and family life ordered to the Divine design builds healthy communities. It is nothing less than the human future.

Now: $18.95
Was:
Here you’ll read the eye-opening, often heartrending life stories of ten people who struggled with some of the most difficult issues human beings face – and who, as they struggled –...

Now: $9.99
Was:
A generation ago, Christian parents didn’t have to worry about how to explain transgenderism to their nine-year-old, or help their teenager deal with mockery at school for believing in...

Because of Our Fathers: Twenty-Three Catholics Tell How Their Fathers Led Them to Christ

Now: $16.95
Was:
A father—the head of the household, as Saint Paul says—has a crucial role and responsibility in his family, not only materially, but spiritually. This is no outdated biblical...

Always a Catholic: How to Keep Your Kids in the Faith for Life—and Bring Them Back If They Have Strayed (Digital)

Now: $9.99
Was:
Most Catholic parents agree: our number-one goal in life is to pass on the Faith to our children. But here’s the bad news: today’s world has a million ways to steal your kids’...

A Teacher of Strange Things: Who Jesus Was, What He Taught, and Why People Still Follow Him (Digital)

Now: $9.99
Was:
We’ve grown way too comfortable with the story of Jesus. Nice man, right? Taught us to love one another. Said not to judge people. Tragically killed by his enemies. We celebrate his birthday...

Now: $9.99
Was:
A generation ago, Christian parents didn’t have to worry about how to explain transgenderism to their nine-year-old, or help their teenager deal with mockery at school for believing in...

Marching Orders: A Tactical Plan For Converting The World To Christ (Digital)

Now: $9.99
Was:
Your mission: Proclaim the Good News Your weapons: Faith and reason—and the power of the Holy Spirit Your opposition: The world, the flesh, and the devil When Dan McGuire was an officer...

Now: $3.99
Was:
Home At Last is a collection from Catholic Answers of eleven distinct and often startling accounts of conversion. Though volumes of convert stories have appeared in recent years, those who love the...

Now: $9.99
Was:
Jesus—Buddha—Allah—Sex—God—Self—Stuff—Drugs—Tech—Prayer—Tunes—Catholic—Christian—Spiritual—None What difference...

Now: $3.99
Was:
Mass Revision is the best-seller from award-winning author Jimmy Akin. As always, Jimmy goes straight to the heart of the issue and cuts through the distortions that have surrounded the liturgy. He...

Now: $0.99
Was:
Islam: A Catholic Perspective provides a concise overview of Islam -- and evaluates their history and beliefs from a Christian point of view. Using a balanced approach, this booklet gives Islam...

Now: $16.95
Was:
**To order a Bulk Case of 20 Books (only $5 a copy) CLICK HERE A generation ago, Christian parents didn’t have to worry about how to explain transgenderism to their nine-year-old, or help...