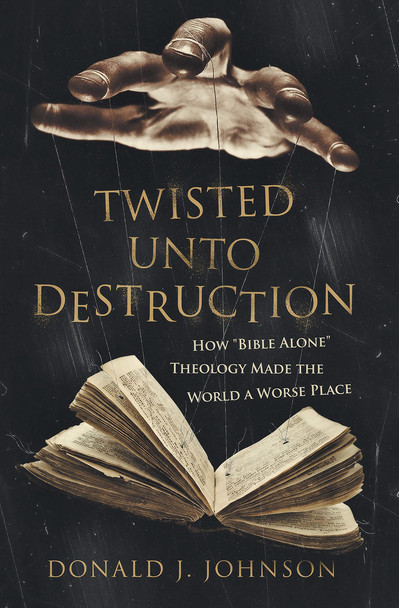 “There are some things in them hard to understand, which the ignorant and unstable twist to their own destruction, as they do the other scriptures.”—2 Peter 3:16

Martin Luther and his fellow “Reformers” turned Christendom upside-down by rejecting the authority of the Church that Jesus founded and claiming instead that personal interpretation of Scripture is to be our rule of faith. This infamous principle of sola scriptura—the “Bible alone”—created 500 years of doctrinal chaos and sectarian division.

But that awful aftermath is not the only legacy of sola scriptura.

In Twisted Unto Destruction, Donald J. Johnson (Convinced, Unprotected) shows how ditching the Church in favor of private Bible interpretation has also enabled some of the modern world’s worst crimes and vices.

Once an Evangelical Protestant who took sola scriptura for granted, Johnson came to realize that setting ourselves up as little Magisteriums—whose opinions on the Bible’s meaning have to be as valid as anyone else’s—not only leads to endless splintering, but makes it possible to use Scripture to justify anything.

Like puppeteers, Christians could make the words of the Bible dance on command, inventing “biblical” endorsements of violence, greed, racism, abortion, sexual depravity, and more. Without an authoritative Church to hold the line, and long removed from a practical consensus, Protestantism has been unable to resist the tide of modern errors.

In fact, as Johnson shows, in many cases, it has endorsed and expanded those errors. Read Twisted Unto Destruction to learn how we can fight this abuse of the Bible and reverse the damage it has caused.

Now: $16.95
Was:
“Where Is That in the Bible?” Fundamentalists — and many other Protestants — use this question all the time, particularly when they’re dealing with Catholics. When they are being trained how to...

Now: $16.95
Was:
Why would intelligent, successful people give up careers, alienate friends, and cause havoc in their families…to become Catholic? As he was considering his own journey into the Church, Donald Johnson...

Now: $18.95
Was:
About a century after Jesus died, a battle began for the Old Testament. Large numbers of faithful Christians fought about its contents and even about its right to be called a Christian book! On...

Now: $16.95
Was:
“There are some things in them hard to understand, which the ignorant and unstable twist to their own destruction, as they do the other scriptures.”—2 Peter 3:16 Martin Luther and...

Now: $20.00
Was: $62.75
Want to learn how to answer non-Catholics but don't know where to begin? We've got you covered! What's in the box? It's a mystery! Build up your apologetics war chest with this selection of five...

Now: $12.99
Was:
He has debated Protestants, skeptics, and socialists. He has refuted countless atheist arguments and debunked a thousand anti-Catholic myths—without breaking a sweat.  But now Trent Horn...

Now: $18.95
Was:
Have you ever tried to have a close, loving relationship with someone you don’t know? It’s not easy. (And it’s probably not a good idea!) Most would never dream of attempting such...

Now: $29.95
Was: $39.95
You’ve probably heard Jehovah’s Witnesses knock on your door and decided not to answer because you didn’t know what to say to people who want to convince you to leave the Catholic...

Now: $40.00
Was: $71.80
A collection of this Fall's best Catholic books packaged together at a savings of over 45%! Meeting The Protestant Response: How to Answer Common Comebacks to Catholic Arguments by Karlo...