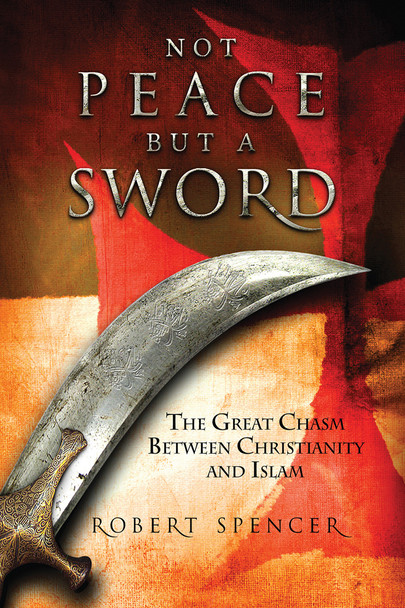 Islam...Is it a religion of peace?...Are Muslims an easy ally in the fight against global secularization and the culture of death?...Are their beliefs really so different than our own?

Some Christians view Islam as a sister religion, a branch of the same Abrahamic tree—lacking the fullness of revelation but nonetheless a religion of peace. Others are more critical of Islamic teachings but still see Muslims as valuable partners in the global fight against secularization and the Culture of Death.

In Not Peace but a Sword, Robert Spencer argues they’re both wrong—and warns Christians against the danger of thinking that Islam is an easy ally.

Many Christian groups, including the Catholic Church, do recognize whatever is good and true in Islam, and their leaders rightly pursue peaceful accord and common ground with all religions. Spencer argues, however, that real peace can come only from truth. Where there is falsehood in Islamic doctrine, morals, and practice, papering over the truth actually hurts the cause of peace.

And so Spencer, the New York Times best-selling author of more than a dozen books dealing with Islam and the West, shines the light of truth on areas where Christians and Muslims don’t just quibble over small details but fundamentally disagree, including:

He demonstrates how these differences are not academic but real-world. They are critical and drive Muslim behavior toward Christians and others. If we fail to open our eyes to these differences, we do so at our peril.

"Robert Spencer is a careful observer of Islam and a courageous voice on behalf of Christians. In his new book, Not Peace But a Sword, he shows Catholics how to take Islam seriously without falling into alarmism, hatred, or bigotry. He provides a needed corrective to the misinformation and disinformation propagated by so many media today."  —Scott Hahn, author of The Lamb's Supper, Understanding the Scriptures and many other books

"In Not Peace but a Sword, Robert Spencer carefully examines the multifaceted challenge posed to Christianity by an increasingly militant Islam. His case is calm, lucid, accurate, and uncompromising in its presentation of the facts of history. He provides an honest and unflinching account of the roots of Christian/Muslim tensions, a robust defense of Jesus Christ and Christianity in response to Muslim claims, and a sobering wake-up call to all Christians everywhere that objects in the mirror are closer (much closer) than they appear." —Patrick Madrid, author of Envoy for Christ and host of The Patrick Madrid Show

"Dialogue with Islam may be the order of the day, but what exactly should we talk about? Before we can discuss what we, as Catholics, might have in common with Muslims, we had better be aware of the defining differences as they are understood by Muslims themselves. This is the invaluable service Spencer provides in this book, which directs our attention to what the Islamic revelational texts actually say and how they are understood by the majority of Muslims today. With his usual clarity and insight, Spencer gets to the essence of the problems that anyone who thinks we can talk our way out of the challenge Islam presents must face. Catholics need to know this material." —Robert Reilly, author of The Closing of the Muslim Mind

Now: $4.00
Was: $4.95
The Crescent and the Cross What are the basic teachings of Islam? How does the Quran compare with the Bible? Does Islam really encourage violence in God’s name, or is it a

Now: $8.00
Was: $17.95
Many Protestants call themselves “Bible Christians”—in contrast with Catholics, who ignore the Bible because they have the Church instead. Too many Catholics have taken this...

Now: $17.95
Was: $19.95
It is no longer permissible to have an honest conversation about Islam. Those who warn about Islam’s threat to our way of life are dismissed as racists and xenophobes by social elites and...

Now: $16.95
Was: $21.95
How can the Crusades be called “glorious”? Our modern mindset says they were ugly wars of greed and religious intolerance—a big reason why Christians and Muslims today can’t...

Now: $4.00
Was: $4.95
The Crescent and the Cross What are the basic teachings of Islam? How does the Quran compare with the Bible? Does Islam really encourage violence in God’s name, or is it a religion of...

$19.95
Now: $8.00
Was: $19.95
The apostles preached and preserved the Faith they received from Jesus. This is the story of what happened next. In The Very First Fathers, Jimmy Akin (author of the best-selling book The...