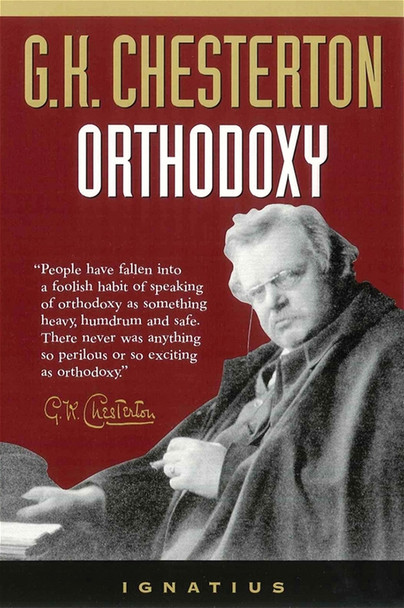 Gilbert Keith Chesterton is one of the most celebrated and reverently esteemed figures in modern literature. He was a phenomenally prolific writer. After achieving early success as an illustrator, he subsequently established his fame as a playwright, novelist, poet, literary commentator, pamphleteer, essayist, lecturer, apologist, and editor. The depth and range of his work are astounding.

A pagan at only 12 and totally agnostic by 16, Chesterton had the remarkable experience of developing a personal, positive philosophy that turned out to be orthodox Christianity. Orthodoxy, his account of it all, has not lost its force as a timeless argument for the simple plausibility of traditional Christianity. C.S. Lewis and many other emerging Christian thinkers have found this book a pivotal step in their adoption of a credible Christian faith. This intellectual and spiritual autobiography of the leading 20th century essayist combines simplicity with subtlety in a model apologetic that appeals to today's generations of readers who face the same materialism and anti-supernaturalism as did the "man at war with his times."

Of the numerous works that Chesterton wrote, the most scintillating synthesis of his philosophy and deeply religious faith was manifested in his masterpiece, Orthodoxy, written when he was only thirty-four and which tells, in his inimitable, soaring prose, of his earth-shaking discovery that orthodoxy is the only satisfactory answer to the perplexing riddle of the universe. Orthodoxy is perhaps the most outstanding example of the originality of his style and the brilliance of his thought.

Now: $21.95
Was:
How can the Crusades be called “glorious”? Our modern mindset says they were ugly wars of greed and religious intolerance—a big reason why Christians and Muslims today can’t coexist peacefully...

Now: $40.00
Was: $99.75
Have you ever read something in the Bible that made you just scratch your head? Has a skeptic ever challenged you to defend a seemingly scandalous verse of Scripture? You’re not alone. The Bible...

Now: $17.95
Was:
When it comes to the history of Christianity, the Catholic Church makes a pretty bold claim: that the earliest Christians were Catholics—and that their beliefs and practices have continued unbroken...

The Faith of Our Fathers: A Plain Exposition and Vindication of the Church Founded by Our Lord Jesus Christ

Now: $21.95
Was:
Explains the basic tenets of the Catholic Faith and why we hold them. Delves into the historical background of virtually everything people find hard to understand about Catholicism, such as...

Understanding the Bible: A Catholic Guide to Applying God's Word to Your Life Today

You Shall Stand Firm: Preserving the Faith in an Age of Apostasy

Now: $19.95
Was:
Between 1594 and 1598, a preacher named Francois converted 72,000 Protestants to the Catholic Faith. These are his words.One of the most remarkable and well-documented events in Catholic history...