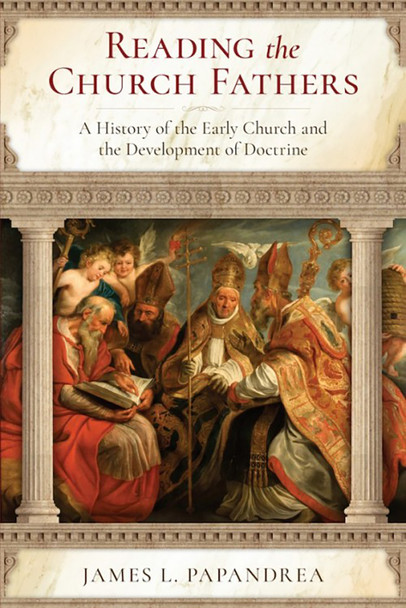 Heresies, schisms, culture of death, persecutions, excommunications … While reflective of headlines from today, these difficulties roiled Christians of the early Church as well. In fact, the earliest Church manual, the Didache, brought clarity to a range of moral issues that our culture continues to grapple with to this day.

Reading the Church Fathers is one of the most lucid and comprehensive overviews of the Patristic period ever written. With simplicity and clarity, Dr. James Papandrea introduces you to all the major theologians, philosophers, and martyrs of the early Christian church and explains the theological principles that guided the Church from the New Testament era through the apologists, and, ultimately, to the development of the major doctrines. Best of all, he uniquely situates the teachings of the early Church Fathers against the social and cultural context of the Roman Empire and its relationship to the Church.

Dr. Papandrea will introduce you to the gnostics and their influence on the early Church, as well as explain how Church mothers, such as Macrina the Younger, laid a foundation for the monastic life to come. You'll learn how our understanding of the sacraments developed and when devotion to Our Lady and the saints emerged. You'll also explore how the New Testament canon was formed as well as the criteria used to interpret early Christian writings.

The Church Fathers: Guides for a Church in Crisis (MP3)

Now: $2.95
Was: $4.95
We remember the Fathers of the Church for their holiness, their wisdom, and their courage to proclaim the truth in an age in which the Church was beset by heresy from within and by persecution from...

Now: $14.95
Was: $17.95
When it comes to the history of Christianity, the Catholic Church makes a pretty bold claim: that the earliest Christians were Catholics—and that their beliefs and practices have continued unbroken...

The Early Church Was the Catholic Church (Digital)

Now: $9.99
Was: $12.99
When it comes to the history of Christianity, the Catholic Church makes a pretty bold claim: that the earliest Christians were Catholics—and that their beliefs and practices have continued unbroken...

The Early Church Was the Catholic Church - 5 Copies for $30!

Now: $30.00
Was: $84.75
When it comes to the history of Christianity, the Catholic Church makes a pretty bold claim: that the earliest Christians were Catholics—and that their beliefs and practices have continued unbroken...

Now: $25.00
Was: $69.75
Want a great collection of Catholic books to read through Advent and into the New Year? We've outdone ourselves with our Advent Edition! What's in the box? It's a mystery! Build up your...

Catechism of the Spiritual Life

Now: $21.95
Was: $24.95
In this dynamic and authoritative book on the spiritual life, Cardinal Robert Sarah shows us how to enter into and progress through the spiritual life. He notes that the goal of this book is...

Now: $14.95
Was:
Get a two-in-one deal with these AirPods cases: an impact-absorbing protector for your earbuds and a stylish accessory you can attach to your clothes and bags with a metal carabiner. This case is...

Now: $18.95
Was:
Protect your phone with style using a durable, dual-layered case. The outer shell is made of impact-resistant polycarbonate, while the inner lining sports TPU lining for maximum impact absorption...

Now: $4.45
Was: $4.95
Born of Water and Spirit What does baptism do, anyway? Must we be baptized by immersion in water, or is sprinkling enough? Is it possible to be baptized if you don’t already believe in...

Now: $4.45
Was: $4.95
The Good News Starts Here Can we really know who wrote the Gospels and when? What are some of the different ways that Matthew, Mark, Luke, and John tell the story of Jesus? Why are other ancient...

Now: $4.45
Was: $4.95
A Map to the Moral Universe What is morality and where does it come from? Is it okay to do something “wrong” if in my conscience I believe it’s right? How do we know what actions...

Now: $26.95
Was: $29.95
Does intelligent life exist beyond earth?For more than half a century, the question of extraterrestrial intelligence (ETI) has been widely dismissed in our culture. That wasn’t always the case...

Now: $13.95
Was: $16.95
The runaway bestseller is now available in Spanish How can you believe all this stuff? This is the number-one question Catholics get asked—and, sometimes, we ask ourselves. Why do...

Tearing Us Apart: How Abortion Harms Everything and Solves Nothing

Now: $26.95
Was: $29.95
With the Supreme Court's overturning of Roe vs Wade, a powerful new book re-frames the current debate: Our fifty-year experiment with unlimited abortion has harmed everyone—even its most...