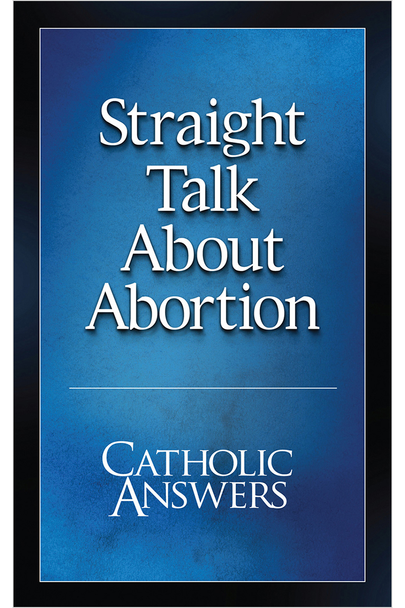 Every year it kills more people than heart disease, stroke, lung disease, cancer, diabetes, AIDS, accidents, murder, and war—put together. It kills almost as many people as all other causes combined. It is the single largest preventable cause of death.

Every year 44 million children die before birth due to induced abortion. By comparison, only 57 million people die after birth from all causes of death annually. Abortion is by far the biggest killer today. Yet few realize the gravity of the situation. Many have been deceived into thinking that abortion doesn’t really kill children, and others — who do recognize the humanity of the unborn — simply do not understand the urgency of the problem. That is why it is time for straight talk about abortion.

How To Talk To Your Teens About Chastity (Digital)

Now: $1.00
Was:
With the recent government mandate requiring insurance companies to pay for contraception, sterilization, and abortifacient drugs, a clarion warning has rung out for all persons of faith: Religious...

How to Talk about Marriage and Same-Sex Unions (Digital)

Now: $4.95
Was:
In How to Talk about Marriage and Same-Sex Unions, Trent gives you the tools you need to make a powerful, compassionate, and non-religious case against redefining marriage to accommodate same-sex...

Now: $0.99
Was:
With the recent government mandate requiring insurance companies to pay for contraception, sterilization, and abortifacient drugs, a clarion warning has rung out for all persons of faith: Religious...

Now: $0.99
Was:
With the recent government mandate requiring insurance companies to pay for contraception, sterilization, and abortifacient drugs, a clarion warning has rung out for all persons of faith: Religious...

Now: $16.95
Was:
**To order a Bulk Case of 20 Books (only $5 a copy) CLICK HERE A generation ago, Christian parents didn’t have to worry about how to explain transgenderism to their nine-year-old, or help...

Persuasive Pro-Life: How to Talk About Our Culture’s Toughest Issue (Digital)

$19.95
Now: $10.00
Was: $19.95
No matter how hard you try, talking with your friends and family about abortion too often winds up at one extreme or the other—either tempers and emotions get out of hand or to keep the peace...

$4.95
Now: $3.95
Was: $4.95
Ever get tongue-tied trying to explain why you’re pro-life? In this talk Trent presents the non-religious reasons to oppose abortion and then equips pro-life advocates to graciously make...

$19.95
Now: $14.95
Was: $19.95
Is the Church wrong on contraception? In a world that practically worships the pursuit of sexual pleasure, the Catholic Church’s teaching on contraception can seem unintelligible. Critics say...

$3.95
Now: $3.45
Was: $3.95
20 Answers: Abortion will deepen your understanding of this critical moral issue, and give you the knowledge you need to explain it to others.  The Human-Rights Issue of Our Age Is it...

Now: $0.99
Was:
Today homosexual activists are demanding the legalization of same-sex “marriage.” In some places they have even achieved this goal. They assert that this is a matter of equality. If...