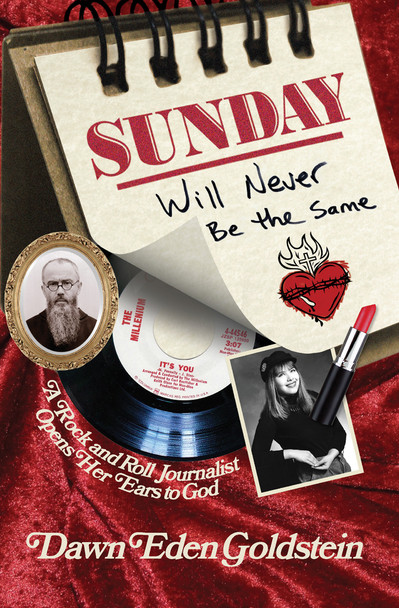 From when she was a little girl, Dawn Eden Goldstein knew she wanted those things—that in them, somehow, she would find God.

But her life’s search led her away from the temples of her childhood Judaism to the music clubs of Greenwich Village, where she became an acolyte of a new religion: rock & roll. Over the years she earned renown as a rock critic and historian, moving among some of popular music’s biggest names, all the while straining to capture that transcendent love and beauty in their every note and lyric.

Yet her longing only deepened; the hole in her heart only grew. God’s voice was calling her, but first she needed ears to hear.

In Sunday Will Never Be the Same, Goldstein (The Thrill of the Chaste) recounts her spiritual journey in beautifully wrought detail, mixing powerful accounts of trauma, healing, and epiphany with funny and poignant anecdotes from inside the music scene. It is the rare “conversion story” that delights as it inspires, amuses as it edifies—and ultimately lays before the reader a lived testimony to the transforming grace of Christ.

“This is the story of a young woman’s journey through the dark minefield of modernity, of a lost soul who searched in vain for joy before finding it in the place where it had awaited her all along. It is a conversion story, written with equal measures of frankness and delicacy. It is also a vivid snapshot of the world of American pop music at century’s end. Whatever your faith—or lack of it—you will put down Sunday Will Never Be the Same filled with gratitude for having been given the opportunity to accompany Dawn Eden Goldstein on her pilgrimage from confusion to certainty.”-Terry Teachout, drama critic, The Wall Street Journal.

Now: $14.95
Was:
If you've been thinking about entrusting yourself to Mary for the first time or if you're simply looking to deepen and renew your devotion to her, 33 Days to Morning Glo

Consecration to St. Joseph: The Wonders of Our Spiritual Father

Now: $14.95
Was:
Drawing on the wealth of the Church's living tradition, Fr. Donald Calloway, MIC, calls on all of us to turn to St. Joseph, entrust ourselves, our Church, and our world to our spiritual father's...

Because of Our Fathers: Twenty-Three Catholics Tell How Their Fathers Led Them to Christ

Now: $16.95
Was:
A father—the head of the household, as Saint Paul says—has a crucial role and responsibility in his family, not only materially, but spiritually. This is no outdated biblical cliché,

Now: $16.95
Was:
True devotion to the Sacred Heart of Jesus moves us to ponder the unrelenting love of Jesus, fully human and fully divine, as He poured Himself out for the world. In Behold This Heart,

$14.95
Now: $13.95
Was: $16.95
Mark McNeil spent years in the Oneness Pentecostal movement: praying in its lively services, zealously spreading its unconventional teachings, and rejecting mainstream Christianity as misguided. He...

Sunday Will Never Be the Same: A Rock and Roll Journalist Opens Her Ears to God (Digital)

Now: $9.99
Was:
Love and beauty.   From when she was a little girl, Dawn Eden Goldstein knew she wanted those things—that in them, somehow, she would find God. But her life’s search led her...

Mass Appeal: The ABC's of Worship

Now: $3.95
Was:
A concise, informative explanation of the Mass in just 32 pages. Revised For The New Mass TranslationIn the new revised edition of his booklet from Catholic Answers, Mass Appeal: the ABC's of...